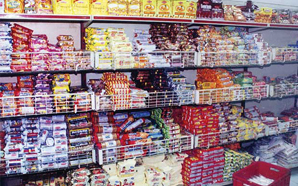 Consumer goods companies are expected to step up the pace of acquisitions in the coming months as organic growth in the Rs 3.2-lakh-crore domestic fast moving consumer goods (FMCG) market remains muted.

While financial year 2015 was the slowest in a decade in terms of value growth, the first nine months of FY16 have been no better. Revenue and profit growth has widened sharply as low commodity prices have pushed up bottomlines even as topline growth has remained weak.

"In the last two years, value growth for the FMCG market has come down to about 4.5 per cent from five per cent. On the other hand, volume growth is around 2.5 to three per-cent from nil earlier," Sanjiv Mehta, managing director and chief executive officer (MD & CEO), Hindustan Unilever (HUL), said during the firm's third-quarter results recently.

The pick-up in volume growth, however, hasn't been as sharp as anticipated by most firms, prompting many of them to look at other levers of growth. The acquisition push comes as firms see a growth in their cash position. In the last five years, companies such as ITC, GlaxoSmithKline Consumer, Asian Paints, Godrej Consumer (GCPL), Emami, Marico, Britannia, Procter & Gamble, Nestle and Jyothy Labs have all seen their cash and cash equivalents growing double.

In this period, players such as HUL have increased their cash balance by 10 per cent and some others such as Dabur have maintained cash on their books at steady levels. 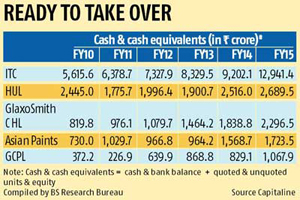 For some of these companies, the acquisition push will mark a return to an inorganic growth strategy after a brief lull. "Now we have improved our capability and foundation in the business, we can look at inorganic opportunities," said Saugata Gupta, MD & CEO, Marico. The maker of Parachute coconut oil and Saffola edible oil had last executed a major merger and acquisition about four years ago when it acquired the personal care brands of Paras Pharma for Rs 750 crore.

It is now open to making acquisitions in the Southeast Asian and east African regions in a bid to expand its footprint. In the past, acquisitions in Egypt, South Africa and Vietnam had helped Marico in gaining a strong foothold in those markets. The international business gives Marico around 25 per cent of its revenues.

The same goes for GCPL, which will step up acquisitions in the future. "The timing is right again. In the last two to three years, we were little slow on the acquisitions bid, having done a slew of them between 2010 and 2013. But now the integration of all the acquisitions in the first phase has gone quite well, I think we can move into second gear on the inorganic (growth) front," Vivek Gambhir, MD, GCPL, said.

GCPL is open to acquisitions in India, Africa and Indonesia, Gambhir said. While there were two acquisitions in Africa in the last one year - South African company Frika Hair and Kenya-based Canon Chemicals - Gambhir admits that these were largely small acquisitions intended to fill key gaps in its portfolio.

If earlier rounds were characterised by medium-sized companies like GCPL, Marico, Dabur and Emami making acquisitions, the next round could see bigger players like HUL and ITC stepping into the fray.

HUL had hinted at this possibility three months ago when it went back to making acquisitions after a gap of 12 years. Mehta reiterated the same at the company's third-quarter results recently. "We have always maintained that we're open to acquisitions if the fit is right. Indulekha (Ayurvedic hair oil brand acquired in December 2015) fitted the bill both in terms of our strategic intent and price. If anything else matches our priorities and intent, we will consider it," Mehta said.

ITC, on the other hand, sees FMCG as its back-up plan for the cigarettes business; and if it has to achieve the target of Rs 1 lakh crore in 15 years, set by Chairman Y C Deveshwar, inorganic growth, say analysts, will be key.

During the company's annual general meeting last year, Deveshwar said, "As we succeed, we will enter everything that can be termed as FMCG." Acquisitions will be clearly critical in achieving this. In May 2014, ITC acquired B Naturals juice for Rs 100 crore, following it up with Johnson & Johnson's brands Savlon and Shower to Shower for about Rs 200 crore in February 2015. It is scouting for more brands in the marketplace.
Tags : Fmcg Acquisitions Fast Moving Consumer Goods Sanjiv Mehta Hindustan Unilever Itc Glaxosmithkline Consumer Asian Paints Godrej Consumer Emami Marico Britannia Procter & Gamble Nestle Saugata Gupta Vivek Gambhir Companies Industry
Advertisement Future Group partners with o9 Solutions for forecasts and refilling