As Samsung tackles others, Micromax gains

The Korean chaebol faces resurgent competitors, while Micromax\'s ad spends earn volumes to close in on the leader 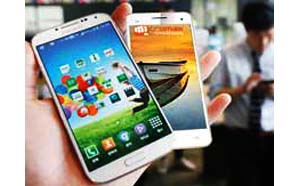 Last quarter (April-June, 2014) was one of the fastest-growing for the Indian handset manufacturer, Micromax. Even three months back, it was trailing Samsung and Nokia in market share in overall handsets.

But numbers this week stirred up some bright prospects for the company. While Hong Kong-based Counterpoint Technology Market Research said that Micromax has usurped Samsung as the overall leader by volume (16.6 per cent share to Samsung's 14.4 per cent in the 20-million-units-per-month handset market that spans smartphones and feature phones), another study by Canalys, a global research firm, points at a narrowing gap, putting Micromax at 3.2 million units to Samsung's 4.4 million.

However, irrespective of who is the leader this quarter, Samsung has been facing a resurgent band of old competitors, while Micromax, the David which has come closest to defeating Goliaths like the South Korean chaebol and American Apple, has added to its numbers with a flanking strategy.

"Micromax and Samsung follow different strategies. Samsung has gained in the past few quarters, and the target segment is the upper end. While the sub-$200 (Rs 12,000) segment, which is the fastest-growing, is Micromax's focus. It is unlikely that Samsung would change course to focus on the lower-end where margins are very low," says Mohammad Chowdhury, partner and telecoms industry leader, PWC India. The sub-$200 also accounts for 75 per cent of total volume, according to experts.

Though, Asim Warsi, Samsung India vice-president (marketing, mobile and IT), says, "Samsung's market share across smartphones, tablets and feature phones is robust and we continue to lead in both value and volume, with significant numbers...To further grow, we have strengthened our portfolio, including that of entry-level mobile phones in the June quarter of 2014."

Samsung, the incumbent in many markets, has been challenged by other global players. "Pricing is one of the key reasons. Also, some of its recent launches, such as the Galaxy S5 did not match expectations, and the company had to cut down prices. The entry of Motorola with competitive pricing, coupled with Blackberry cutting prices drastically, have hit its growth," says an analyst with a global consulting firm.

While Samsung had challenged the erstwhile leader, Nokia's rule with smart feature phones that beat the Finnish giant at its own game, it has since graduated to painting for itself a premium image with its Galaxy range of phones. Galaxy's flagship S-series launches, every other year, are often touted as iPhone-killers.

Micromax's focus on the price-sensitive segment is not fooproof yet. It operates on a wafer-thin net margin of 6.1 per cent. According to data available with the Registrar of Companies, Micromax reported a Rs 190-crore net profit, (6.1 per cent of its Rs 3,106-crore revenue in 2012-2013). Its profit before tax was Rs 280 crore, about 9 per cent of revenue. Samsung and Apple, operated on net profit margins of 13.22 per cent and 21.42 per cent, respectively, in their previous accounting year. Samsung and Apple also reported higher operating margins at 15.9 per cent and 28.57 per cent, respectively.

However, Micromax has not scrimped on marketing spends. Spending about Rs 200-crore on advertising, it has snapped up everything from TV-show sponsorships to concerts to highlight launches. Last year it roped in Hollywood A-lister Hugh Jackman, who is the third-highest paid male actor in the world, to endorse its Canvas series. "This has helped Micromax get rid of the tag of a cheap-product provider. It gained volumes even in metros, which it couldn't crack earlier," says a former executive of the company. Micromax has also tried to create a buzz with its features such as unlocking/locking the Canvas 4 with a shake. It was also the first Indian company to bring octa-core processors, though they are often defeated by low battery life.

Professional senior management hires such as Vineet Taneja, from rival Samsung, who joined this year as CEO and Sanjay Kapoor, ex-Bharti Airtel CEO, who joined as chairman of the board, are expected to give Micromax a boost.

On its cross-hairs is a sizeable share in quite a few other countries (in East Europe and Russia). The international business contributes around 10 per cent to Micromax's revenue, though the target is to take it to half its revenue over the next five years. But it won't be a cakewalk, as in markets such as Russia where it entered with a Rs 100-crore campaign, 40 per cent of the market comprises smartphones, in contrast to less than 10 per cent in India, and is less price-sensitive.

Google has recently picked Micromax as its preferred partner for its $100 (Rs 6,000) handset. A brand expert says, "Micromax has always been the challenger brand, with pricing being the key to success. For the brand to grow, it has to find new customers."