Can Micromax make the leap from Indian to global brand?

The promoters have stepped aside to make way for professional managers as the company looks to go overseas. But there are headwinds they need to watch out for 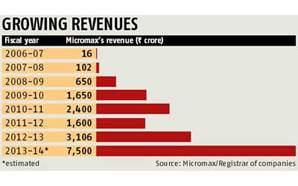 It took just a couple of Skype calls for Micromax founders - Rahul Sharma and Vikas Jain - to rope in Hollywood actor Hugh Jackman to endorse their brand of mobile phone handsets. But the decision to hand over the running of the company to industry professionals has obviously come after many closed-door meetings. Successful entrepreneurs globally have had to take a decision like this at some point or the other to ensure their company keeps growing. Micromax proved no exception.

Almost 15 years after Sharma and Jain, along with two other friends - Sumeet Arora and Rajesh Agarwal - founded Micromax, they decided to bring in Vineet Taneja, an industry veteran who has marketed handsets for key rivals Nokia and Samsung for many years, as their company's chief executive officer.

Two weeks after Taneja's appointment, there was another top-level induction. Sanjay Kapoor, who was CEO of Bharti Airtel, the country's largest telecom operator, joined India's second largest handset company (the largest among the domestic handset makers) as chairman of the board. Kapoor was also inducted into the promoter group of Micromax. In the coming months, Micromax will likely see many more professionals coming on board under the new leadership.

The idea behind these appointments is to give the home-grown company an imprint across the world. Going global was not a whimsical plan. Micromax had actually tried it in 2010, but the attempt was not a success. Three years later, it again ventured into new geographies, starting with Russia, with a more sustainable model.

But did this new thrust warrant the entry of the Kapoor-Taneja duo? "The company has grown into a billion dollar organisation," says Sharma. "There's always an inflection point when professionals are better suited to take the company to the next level." Which begs the question: has Micromax become too big to handle for the promoters? Maybe not. But it certainly needs to be managed by professionals. Even Sharma has been attending a course at the Harvard Business School (the Owners President Management Program - a three-year course with one month of learning every year).

In 2006-07, at a time when Micromax had revenues of Rs 16 crore, it set a target of Rs 1,000 crore without stipulating a time frame in which this was to be achieved. People thought it was an unrealistic aspiration. Seven years hence, Micromax has grown almost 500 times to Rs 7,500 crore (estimated revenue in 2013-14).

Beyond handsets, beyond borders

Micromax needs professional management for various reasons. For one, it is looking beyond the handset business. While Sharma maintains the markets in India and other developing countries are still not fully tapped, especially the smartphone segment, the company has already ventured into LED televisions. "It's not that we want to shift focus from handsets, but LED TV sets are an extension of the screens business. Consumers should have all screen options from Micromax," says Sharma.

Kapoor will also spearhead the company's foray into other international markets and will look after building synergies for Micromax's existing international businesses. Kapoor, believes Sharma, will be able to provide the required strategic direction to take the company's billion dollar business to the next level of growth and expansion. "We are building capabilities," he reasons.

Micromax has already taken its products beyond India to neighbouring Bangladesh, Nepal and Sri Lanka. It had planned in early 2010 to enter Nigeria and Brazil, but this did not come through. It also had a presence in the United Arab Emirates, but offered a limited portfolio in that smartphone-dominated market. It continues to sell in West Asia through retail chains like Carrefour, Axion and Lulu. Its unsuccessful attempt to expand internationally was reflected in its financials. In 2011-12, revenues dropped 34 per cent to Rs 1,600 crore. By focusing on the home market, Micromax clawed back to double-digit revenue growth the following year.

At the moment, international business contributes just around 10 per cent to Micromax's overall revenue, which Sharma believes, will grow up to about half of revenues over the next five years. Its current interest, Russia, of course, will be a different market and more challenging for the company as almost 40 per cent of the handset market there comprises smartphones, against the under 10 per cent in India. As smartphones account for about 60 per cent of Micromax's current revenue (it's growing even as revenue from feature phones is decreasing), it makes sense for the company to look at markets like Russia.

Moreover, Russia, which the company has entered with a Rs 100-crore marketing spend, is considered the gateway to Eastern Europe, a region where the mobile phone business is retail dominated, not driven by operator bundling. Markets like Romania, the Czech Republic, Hungary, Poland, Slovakia as well as Africa are also on the radar.

This time, Micromax is hopeful of the Russian region providing good returns by the second year. "Its success in India will help Micromax do well in international markets. But it may take time," says an analyst with global research firm Gartner. "It is a full-grown handset company that understands the end-user demand."

What next? "Proliferation of data services and cutting-edge devices that make technology affordable for masses will be critical for the next phase of growth," says the newly inducted chairman, Kapoor. "I am confident that Micromax will lead this transition."

For a company that has been importing all its devices from China, Micromax has now taken a new turn by making a few products at home. Both the R&D and design are carried out in India. "Each one of our LEDs, and 100 per cent of our tablets are already manufactured in India. We have started making phones too. We have a facility in Rudrapur," says Sharma.

Meanwhile, market insiders say the company has been facing challenges in procurement with some of its 11 Chinese vendors terminating supply as they have themselves entered the Indian market with their own products. In the past year, this handful of Chinese phone makers have made inroads and tapped close to 10 per cent of the estimated Rs 40,000 crore handset market in India.

Recent media reports suggest that Micromax is also on the prowl for acquisitions. Last month, reports said Micromax was considering buying Pantech, South Korea's third ranked smartphone maker after Samsung and LG. It has been undergoing a restructuring after suffering losses for six quarters. Micromax, however, has officially stated that talk of this acquisition is mere market speculation.

Micromax has no debt on its balance sheet. Sharma says that the company doesn't believe in taking loans from financial institutions for expansion. It had, in the past, only raised one round of funds from TA Associates and Sequoia Capital, which together hold about 20 per cent of Micromax. The rest of the stake is held by the four founders. Micromax may be gearing up for public listing. The company had, in 2011, withdrawn a Rs 466-crore initial public offer citing unstable market conditions.

Despite its quiet confidence, Micromax is grappling with a few problems. It has lost market share even in the home market in the past year. According to IDC, Micromax had a 15 per cent share in the smartphone market in India during the first quarter of 2014, down from 18.8 per cent in the same period in 2013. Its market share was even higher in the second quarter in 2013 at 22 per cent, according to IDC.

Also, Micromax operates on a wafer thin net margin of just 6.1 per cent. According to data available with the Registrar of Companies, Micromax reported a Rs 190-crore net profit, 6.1 per cent of its Rs 3,106 crore revenue in 2012-2013. Its profit before tax was Rs 280 crore, about 9 per cent of revenue. The world's largest smartphone makers, Samsung and Apple, operated on net profit margins of 13.22 per cent and 21.42 per cent, respectively, in their previous accounting year. Samsung and Apple, which make cell phones among various other lines of business, also reported higher operating margins than Micromax at 15.9 per cent and 28.57 per cent respectively. Perhaps its new strategies will help Micromax catch up, at least statistically, with its mega rivals.

While Micromax has become the country's second biggest smartphone brand in just six years, there are signs all is not well with the company. According to International Data Corporation, Micromax's market share has fallen from 22 per cent in India in the second quarter of 2013 to 15 per cent in the first quarter of 2014.
Tags : Micromax Samsung Bharti Airtel Nokia
Advertisement