ED Hardy’s new store design concept will boast a larger-than-life façade of a tiger’s head along with major in-store design changes. The new concept, soon to be launched at a store at Bangalore’s Phoenix Marketcity Mall, has no current presence globally. 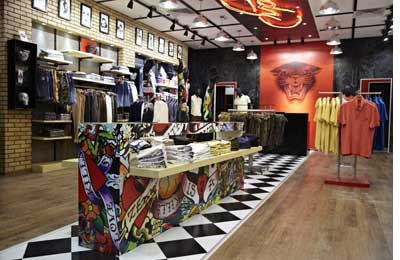 American tattoo artist and designer Don Ed Hardy’s clothing brand Ed Hardy will soon bring a new store design concept in India starting with a new store at Bangalore’s Phoenix Marketcity. The design will incorporate a giant façade of a tiger’s head, to denote the icon animal of the brand, which is inspired by tattoo art. The façade is currently being protyped by Bangalore-based agency Creative Sourcz.

The new concept will also entail major changes in terms of store layout, fixtures, walls, visuals, graphics and props. As shared by a brand spokesperson, the design concept, which is yet not been done globally, will be incorporated in upcoming Ed Hardy stores.

Ed Hardy, brought to India by Arvind Lifestyle Brands Ltd, already repositioned its branding during its comeback in India about a few years back. Last year, the brand shared their vision to become a 500-crore brand in India 2022, armed with robust expansion and branding plans. The brand currently is retailed through 20 exclusive brand outlets mostly in metros apart from 75 departmental stores, more than 100 MBOs and all leading online channels.