H&M, Zara square off in Mumbai

H&M, the Swedish fashion retailer, has already announced that it will open its maiden stores in Mumbai this autumn while Zara is adding four more stores 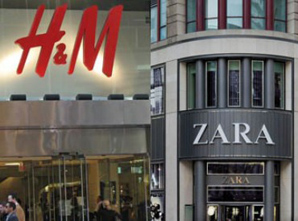 Arch rivals H&M and Zara are heading for a face-off in Mumbai. H&M, the Swedish fashion retailer, has announced it will open its maiden store in Mumbai this autumn. According to sources, it has booked space in the city's malls for two stores.

Zara had four stores in Mumbai and was opening three more, sources said.

According to sources, H&M is also in talks with Inorbit Mall in Malad to open a store there and has booked space in L&T Realty's mall in Seawoods. When contacted, Inorbit executives declined to comment. L&T Realty executives could not be contacted for comment.

Sources said H&M had worked out a special revenue sharing deal with Phoenix Mills. An H&M spokesperson declined to talk about individual mall deals. "In India, we see a great potential to open many stores and we look at many different options. Our expansion strategy is to always open at the best business location,â€ the spokesperson said.

Zara has been present in India for six years and has 16 stores in the country. After a landmark leasing deal in south Mumbai, where it booked 50,000 sq ft space near Hutatma Chowk for which it will pay Rs 2.5 crore rent per month, the fashion brand is in talks with Oberoi Mall in Goregaon to open a 28,000-sq ft store. Oberoi Mall executives could not be contacted for comments.

Zara had also taken space in L&T's mall in Seawoods, sources said. A mail sent to Zara's parent Inditex did not elicit any response.

"Mumbai has limited good quality mall space and brands have to look at the same set of malls,â€ said a mall operator who did not wish to be named.

According to Mukesh Kumar, vice-president, Infiniti Malls, both Zara and H&M are poised to do well in Mumbai. "While Zara is more premium and sells fast fashion, H&M is more affordable. Mumbai has space for both brands,â€ he said.

Zara and H&M co-exist in Select CityWalk in Delhi, the No 1 mall in the country in terms of sales, and in Ambience Mall in Gurgaon. H&M is also opening a 37,000-sq ft store in DLF's Mall of India in Noida on Saturday, which will be its 4,000th store.

H&M had in December 2013 received approval from the Foreign Investment Promotion Board to invest Rs 720 crore in India, becoming one of the biggest foreign investors in single-brand retailing in the country.

"Our stores must always be in the best business location in a city. This is so important that we would rather wait until the right location becomes available,â€ the H&M spokesperson recently told this newspaper. The company has said it plans to open 50 stores in India.

BATTLE OF THE GIANTS