The company had in February this year raised $4.5 mn in a Series-A round of funding led by Sequoia Capital 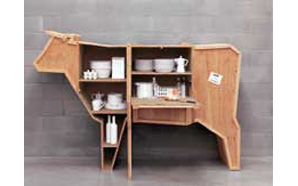 Homevista Decor and Furnishing Private Limited, a Bengaluru-based startup that owns and operates online fixed furniture marketplace Homelane.com, is aiming at cornering two per cent of the Rs 6,000- crore fixed furniture market in Hyderabad in the next 12 to 18 months, said co-founder and chief executive officer Srikanth Iyer.

"The Hyderabad realty market is poised to completely turn around now and is expected to consume 100,000 apartments this year. We are pretty much betting big on it,â€ he said, adding that Homelane.com was hitting 100 projects a month in Bengaluru and was expecting a similar number in Hyderabad as well, with the average transaction size being Rs 5 lakh.

Announcing the launch of Homelane.com's operations in Hyderabad on Wednesday, the first city to spread its horizons outside of its Bengaluru headquarters, Iyer said the company was gearing up to expand to Chennai, Kochi and Pune in due course, before entering Mumbai and the National Capital Region (NCR) within the next nine months.

"We are also looking at foraying into the international markets, Southeast Asia to start with. This, however, is still at the drawing board stage,â€ Iyer said, without drawing any time line for the overseas expansion.

Terming Homelane.com as an'asset-light' company, Iyer said the firm would use the latent capacities of existing furniture manufacturing units in the country to make products for its end consumers.

"Homelane.com currently garners 10 per cent of its business from B2B (business-to-business) and the remaining 90 per cent from B2C. We expect this mix to continue,â€ he said.

The 11-month-old startup was co-founded by Iyer, former chief executive officer of Pearson India and founder of Edurite, and Rama Harinath, an alumnus of IIT-Chennai and IIM-Bangalore.

Homelane.com had in February this year raised $4.5 million in a Series-A round of funding led by Sequoia Capital, with participation from Aarin Capital and existing investors K Ganesh and Meena.

"Currently, we are pretty well funded. We don't see any need to immediately go for another round of fundraising,â€ Iyer said.