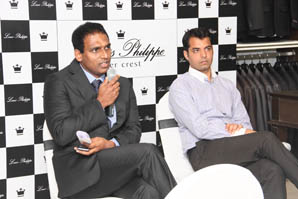 Madura Fashion & Lifestyle's premium menswear brand Louis Philippe recently unveiled its first flagship store in Coimbatore, as part of its retail expansion strategy and increasing its reach in Tier II cities across India.
Louis Philippe has launched a new store on Race course road in Coimbatore, Tamil Nadu. Since its foray into the Indian market, Louis Philippe has successfully established itself as the premium menswear brand in the country. It has made its mark in most of the big cities of the country and now plans to augment its reach to the tier two cities. The brand has also decided to introduce 70 to 80 stores by the end of this year.

Located in a prime area of Coimbatore, the new Louis Philippe store is spread over an area of 2515 sq.ft and takes on the brand's new retail identity which was recently showcased in Louis Philippe's outlet in South Extension, New Delhi. Speaking at the launch of the new store, Jacob John, Brand Head, Louis Philippe said, "Louis Philippe has a new story to tell year after year. We are elated to make our presence felt in this part of the country and we are hopeful of a fantastic reception to our latest venture. Louis Philippe does not rest on its laurels and will continue to excite its target audience with innovative and inspiring offerings.â€
Starting from a delectable assortment of men's apparel to accessories ranging from ceremonial and corporate suits, blazers and shoes are being showcased at this new store.
Tags : Louis Philippe Jacob John
Advertisement