As sales on e-commerce sites soar, some physical stores are embracing the change while others are warning customers against online purchases 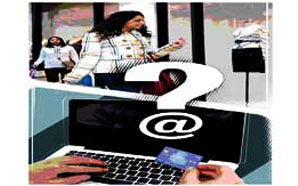 After reporting losses of close to $200 million in the holiday quarter, Radio Shack, the American chain of electronic retail stores, announced last week that it would close a fifth of its 5,000 stores. Competition from online majors, especially the largest in the world, Amazon, is said to be behind the decline of Radio Shack and many others across product categories. The US media has compared the sales numbers of Amazon and Radio Shack to bring out the disruptive nature of online retail: in 2003, both companies posted annual sales of $5 billion; in 2013, Amazon reported $75 billion and Radio Shack, $3.5 billion.


Underscoring that point rather tellingly, popular American website Salon wrote: "When you can't compete on either price or selection, you are doomed." That perhaps is the fear playing out in the Indian retail market too, where e-commerce is nascent but is growing at a furious pace (estimated at 88 per cent in 2013, to touch $16 billion), in the process making brick-and-mortar companies nervous, to put it mildly.

Tension between online and offline retailers has been simmering for a while, but it came to the fore last month when Chinese computer manufacturer Lenovo posted this advisory on its website: "e-commerce websites like Flipkart, Snapdeal and Amazon India are not authorised Lenovo resellers. We encourage you to check your warranty entitlements when you buy from these websites." Lenovo then listed its authorised stores. A Lenovo executive says a lot of resellers have cropped up at some of these sites, largely due to a marketplace kind of a set up, and they were selling at very low predatory prices. "These, we believe, may or may not be authorised or genuine products," he says. Earlier, Toshiba and Nikon too had put out similar advisories.

These advisories have come at a time when e-commerce is attracting foreign funds like never before and the rush for shopping online and through mobile phones is gaining currency even in the hinterlands. On their part, Flipkart and Snapdeal, both marketplace e-commerce players, have said the products sold on their platforms are genuine. Since these are sold by authorised dealers on their portals, these are eligible for a warranty too. Also, experts call the insistence on "authorised dealers" a rather unnecessary move because of the inbuilt warranty in electronic products irrespective of the source of procurement as long as they are genuine. The real issue is of pricing, they say. A spokesperson from Amazon, which is present in India as a marketplace player, adds, "As a neutral marketplace, we do not determine prices. Sellers are also contractually obligated to list genuine products with manufacturer warranty."

There's actually more to the online-offline war. Now, malls, alarmed at the dwindling footfalls, have started telling brands that they should not offer better discounts across online platforms and that the product range should be the latest in the brick-and mortar-stores, and these should be launched online later. Even as online loyalists and analysts refer to the brick-and-mortar demands as "old school muscle flexing" and "restrictive trade practices", malls refuse to be treated as what they call "trial rooms". Malls argue that shoppers are increasingly walking into branded stores to check size, design and price, to later order the same online at a cheaper price. That practice must end, stress mall operators.

While brands such as Nike, Adidas, Tommy Hilfiger and United Colors of Benetton have indicated they would not sell their latest collections online and would adhere to uniform discounting policy online and offline, the fairness of it all is being questioned. Arguing that the demand made by malls and brands is not at all fair, Subho Ray, president, Internet and Mobile Association of India, says: "Pricing in India has a ceiling (the maximum retail price, or MRP), no floor. If companies are trying to drive at a common or uniform floor prices, I am sure Competition Commission of India would be interested in hearing about them." Ray, however, says that the sectors which are popular on marketplaces would get used to it soon, referring to the online competition. "But the same issues would be raised when new items become popular on marketplaces." Incumbent businesses first reject, then ridicule, then resist new models before adopting them, according to Ray.

Deep Kalra, founder and CEO of MakeMyTrip, the online travel agent listed on Nasdaq, points out that the scene was quite the same in the travel business until a few years ago. Calling the online-offline face-off "trial by fire", Kalra recently told Business Standard, "We have gone through it", but it has now settled down. There's hardly any price undercutting on travel portals now. Booking flights or hotels through travel portals is a matter of convenience and choice, rather than about pricing, he said.

The uniform price that Kalra spoke about is turning out to be a reality even in e-commerce dealing with goods. Fashion e-tailer Myntra, for instance, is not focused on deep discounts. Myntra CEO Mukesh Bansal says: "We believe in a level playing field, so we welcome a uniform pricing policy." Myntra, according to Bansal, works with brands and not with distributors or local suppliers. Uniform pricing could be a setback for those e-commerce players which work with distributors or local suppliers, he adds. Flipkart, which too is now not as much of a deep discount player as it once was, especially in books, says it remains "committed to providing the widest collection of brands".

Pricing may be one thing, but when it comes to the latest collection, online stores often score over brick-and-mortar stores. In fact, Motorola's latest MotoG phone collection was launched on Flipkart exclusively last month - a clear show of online muscle. Even electoral merchandise including apparel and objects symbolising political leaders Narendra Modi and Arvind Kejriwal are believed to be doing brisk business online.

The foreign money that has flowed into Indian e-commerce also demonstrates the growing might of online sellers. India's e-commerce firm Snapdeal recently raised close to $134 million in the latest round of funding, with eBay as the leading investor. This is the second time that investors led by eBay poured money into Snapdeal, which has a similar model like the American company. eBay's stake in Snapdeal is estimated at 20 per cent currently. Flipkart raised $360 million from a clutch of mostly foreign investors last year, stunning the industry. So far, Flipkart has raised $560 million in several rounds of funding. Myntra raised $50 million earlier this year and $125 million in five years that it has been around.

That's not all. The fact that e-commerce is the business of today is not lost on anybody. The largest retailer of the world, Walmart, is learnt to be chalking out its business plans for e-commerce in India. The American major, which operates cash and carry or wholesale stores in India and is keen on opening supermarkets or multi-brand outlets too, is now preparing to launch a marketplace e-commerce format, the one followed by not just Flipkart and Snapdeal but also Amazon and eBay in this country. And, just a few days ago, Flipkart announced it had hit the run rate of $1 billion gross merchandise value, a year ahead of the 2015 target. Myntra and Snapdeal too are eyeing $1-billion sales in a year.

Domestic majors such as Kishore Biyani's Future Group are also betting big on their e-commerce strategy, indicating that even the so-called offline players are going big on e-commerce. Bharatiya Janata Party's prime-ministerial candidate, Narendra Modi, too, in a recent address to traders urged traditional businesses to transform with the help of technology. E-commerce was Modi's answer to beating big brands including multinationals. Even so, Praveen Khandelwal, general-secretary, Confederation of All India Traders, the organiser of the event where Modi spoke, says e-commerce is eating into the retail pie of brick-and-mortar stores. "The dynamics of their procurement are not clear and they are selling at much lower prices than offline retailers," Khandelwal complains.

Such complaints are not new. Earlier, the European Commission had released anti-trust rules allowing luxury brands to put certain restrictions on online retailers in the wake of disproportionate online and offline pricing. The argument was that online player, which didn't have physical outlets, were able to go for aggressive discounts. Also, according to a December report by Bloomberg, Samsung Electronics and Royal Philips were among companies raided by the European Union's anti-trust officials as part of a probe into suspected online-sale restrictions.

Technopak Chairman & Managing Director Arvind Singhal describes the clampdown on e-commerce as an "anti-competition mindset". It's an attempt to flow against the tide of e-commerce expansion, says Singhal, "but I don't think the muscle flexing will work". In an earlier interview, Singhal had said e-commerce would emerge as a much bigger disruptive force, even more than FDI in multi-brand retail. Those sound like prophetic words!

* $22 billion is the size the industry is expected to touch in five years, according to research firm CLSA

* Flipkart hit $1 billion in gross merchandise sales last week -a year ahead of the target. Myntra and Snapdeal aim to reach the $1-billion target by 2015

* Flipkart has switched from an inventory-led model to the marketplace format, Snapdeal has been a marketplace loyalist