Keeping in line with both sustainability and aesthetics in mind, Indian retail sector is fast embracing soft signage, which also uses nomenclatures like fabric or textile signages. VM&RD talks to leading brands and retailers, along with some of the leading vendors who are fast joining the changing curve of the signage industry. 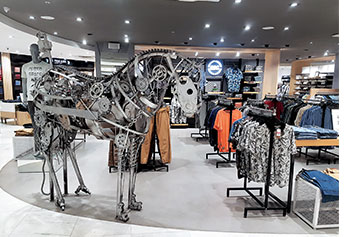 Last year itself, VM&RD estimated that top 25 retailers that occupy about 75 million sq ft of retail space use about 15 million sq ft of signage fundamentally as façade, interior, wayfinding and merchandise signages. The overall signage industry is growing at a steady CAGR of 21% (Source VMRD 2017 survey).

Following a global tide of moving towards textile keeping in line with both sustainability and aesthetics in mind, Indian retail sector is fast embracing soft signage, which also uses nomenclatures like fabric or textile signages. However, soft signage industry in India is still at a nascent stage contributing about 5% to the total signage printing (Source : Chemarc). The tide is expected to turn owing to Government legislation banning PVC materials, the rising concern on sustainability of store set-ups, logistical ease and above all, the aesthetics of the communication. VM&RD talks to leading brands and retailers, along with some of the leading vendors who are fast joining the changing curve of the signage industry.

One of the leading brand house of the world, Inditex, name behind leading fashion brands like ZARA, Oysho and Massimo Dutti and with over 1300 eco-efficient stores worldwide since 2007, made an announcement last year to bring all its stores under eco-efficient model by 2020. The benchmarks included giving priority to recycled or re-used materials and locally-sourced materials that can save energy in the course of extraction, manufacture and transportation. Leading British retailer Marks & Spencer started this journey even before and has two LEED-certified green stores already here in India one each in Delhi and Bangalore. The retailer’s latest store design concept, Boutique, has been created to incorporate at least 20-25 fabric lightboxes inside a typical store premises (covering a space of about 20,000 sq ft -25,000 sq ft). To re-instate the use of fabric even further, the green-sensitive retailer is using these lightboxes even at branding outposts and at windows of their Lingerie & Beauty speciality store formats.

Swedish fashion giant H&M started their green store prototype globally back in 2013 to create store set up sustainability in terms of materials, construction, energy, operations and other aspects. Today, while many brands are yet to adopt fabric signage in their windows, H&M is effectively doing it. 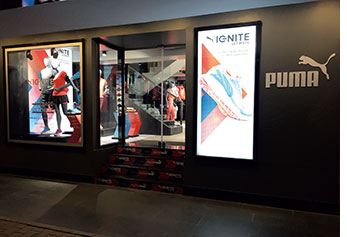 Back in India, the aesthetics and installation ease of fabric signages seem to win over anything else. Sportswear brand PUMA, who brought the LEED-certified green store concept (only one store in Bangalore) right after Marks & Spencer did so in India, today uses 70% soft signages among their total signage proportion in a store. Keeping the sustainability part aside, Puma saw more dynamic communication coming through slim backlit visuals at category walls, in-store campaigns etc.

For a homegrown lingerie brand, Amante, with a relatively smaller store network with only 15 stores nationwide, soft signages made all the difference when the brand value was decided to be built around strong visuals. Apart from the main signage, Amante uses only fabric siganges for sheer need of clarity of communication. Marginal difference in capex seems not to be an issue even for the brands who are looking at rapid and extensive rollouts. Slated to open 200 more exclusive stores by end of the fiscal, ABFRL’s menswear brand Peter England is in the process to convert all its in-store signages and graphics into fabric materials at all its exclusive outlets.

Moving to one of the leading large format retail operators in India, Central revamped their store concept into a high-definition one with large store sizes. Central switched to “all-fabric” in September last year and today uses about 3000-4000 sq ft of signage in a typical store spanning between 1 lakh sq ft to 1.5 lakh sq ft overall. 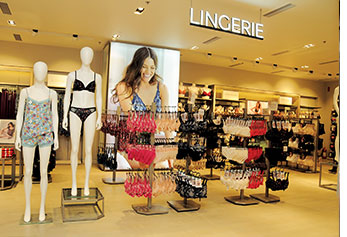 There’s huge demand of backlit signages specially the brands who are re-inventing their retail identity. For example, footwear major Bata, who has recently launched its Red Concept to make the old identity more exciting and sharp, is moving towards cleaner façade, newer headers and category signages. According to the brand, soft signage is vital to make these changes happen. Landmark’s value fashion chain Max, when introduced their new identity last year, relied heavily on light boxes and backlit fabric way finding signages to revamp their stores. Future Group’s path-breaking departmental store chain Big Bazaar, introduced its Gen Next concept about two years back and looked fresher and younger with substantial use of fabric signages. Reliance Trends, while on a fast expansion mode with around 435 stores across the nation, is using 70%-80% of soft signages of their total use of signage, owing to the aesthetics and flexibilities of the products.

As fabric signages are winning applauds for typically being backlit, are all the leading brands and retailers using backlit? Leading fashion retailer chain Lifestyle thinks differently. The large format chain, by business strategy, does not encourage strong visuals in order to remain an uniform approach across all brands’ SISs, except for beauty brands who are using several types of soft signages.

The Indian retail signage industry has been growing at about 21% (incidentally, the same CAGR of that of the retail industry). Today, although a mix of soft and hard signages, there’s an undeniable demand in the market and talking on infrastructural parameters, machine manufacturing companies like Colorjet is promoting various range of Latex and sublimation machines, which are required for soft signages. However, only some signage makers are warming up to the idea of fabric signages.

Among some of the leading service providers in soft signage, Mumbai-based Signext Display System has witnessed the changing curve about 2 years ago.  The company today is integrating various other elements like acrylic letters, shopfitting accessories etc into their range of fabric light-boxes. Going on the product development route, Chennai-based signage manufacturing company Sinex Systems is developing its aluminium profiles to further ease the installation process of their range of soft signage solutions. Another leading name in this category Macro Media Digital Imaging has disclosed their plan to invest about INR 7 crores in Q2 and Q3 of the current fiscal towards infrastructure building of soft signages. Meanwhile, Bangalore-based Supra Digital, one of the early entrant in this category, is seeing hope in sustainability and making investment towards it. Mumbai-based The Flag Company is setting a perfect example of make-in-India practices by manufacturing almost all parts of soft signages in India (except for the LEDs) and offers longest width of textile without any joint. 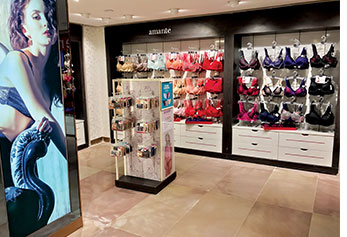 The impact of “soft”

As we conclude, it will be interesting to throw some light on the power of signage and communication in an impactful retail environment. Do you know that 70% of consumers entered a store for the first time based on the signage, while about 55% are deterred because of poor quality of store signage? About 65% of browsers are believed to have converted into shoppers based on the signs that caught their eyes and about 60% of stores have reported an increase of about 10% sales simply by enhancing the visibility of their signage. All the data contribute to the ever-lasting power of signage quality and there’s also no denial that soft/fabric/textile signage does it more effectively than other media. There are challenges of incorporating them into exterior signages and there has also been resistance because of the price point which is about 20% higher than regular media. The good news is that leading signage players are investing towards it and more interestingly, Indian machine manufacturers are contributing to the growth trajectory. Though in infancy, the tide is sure to take a turn and, it’s also a turn towards a more sustainable and hazard-free retail environment. 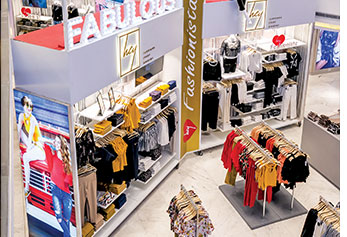 As we are in the process of revamping 200 stores to our latest concept, cleaner façade and sharper in-store graphics will play a pivotal role. We have already started relying heavily on soft signages for our windows and in-store visuals, category headers etc.

Today, some of the biggest brands, who stand out for their unique store design, count on soft signage. It gives us the clarity that vinyl and flex could never give us. Hence, apart from our main signage, we have been using only fabric from the very beginning.

We have a mix of flex and fabric signages in our stores although the part of fabric is as good at 70% of total use. Though we started using it as sustainability as priority, but we realized that it’s visually much more appealing. Interestingly, these options are more logistical as some of the in-store visuals come with new-age silicon sides as opposed to the earlier-used clip-on frames.

Currently, we have about 700 stores and we are dealing with a few lacs of square feet. We want to move into recyclable and fabric materials as we can see the opportunity of recycling almost 90% of our in-store visuals, campaign signages etc. Through this, we will not only support environment but will also bring down our operational cost.

We moved to soft signages about 4 years back for the sheer comfort of logistics and aesthetic value. Today, 50% of our premium stores use soft signages majorly (except for exterior signage), while remaining use vinyl and not flex. However, we are replacing fabric in those stores too, as soon as we are bringing them to the premium level.

Apart from our exterior signage, we moved to complete use of fabric signage in September last year and we are using a mix of various types of fabric signs including backlit, frontlit and light boxes etc. These products contribute substantially to our high-definition concept.

We are using only 10% of fabric among our total use of signages. The only category in our stores that is using fabric is the beauty section. As our business strategy doesn’t allow us much to experiment with backlit signages, which are famous as fabric products, we have stayed away from it except for few experiments with lit visuals in the escalators.