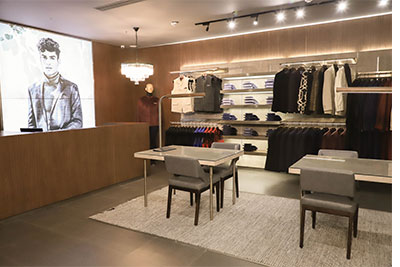 Targeting the luxury menswear segment in India with a 50% year on year revenue growth, Tailorman plans to slowly expand to all major cities and locations across India and internationally in the coming years. The brand currently has 9 stores across Chennai, Bangalore, Hyderabad.

Gautam Golchcha, Co-founder of Tailorman said, “Tailorman has held up a reputation for expertly crafted British tailoring across Bangalore, Hyderabad and Chennai. The Bangalore head-quartered brand will now be bringing those talents to New Delhi. Launching its first New Delhi store this November, Tailorman at Ambience mall, Vasant Kunj, will bring 1500 sqft of prime made-to-measure tailoring to Delhi’s elite and fashion hub. With Tailorman’s own positioning as a trendsetter and unorthodox brand, Delhi seems like the perfect city for us to expand into.”

Alexander Asvarischtsch, Chief Designer¸ Tailorman, added while speaking at the store launch, “In India, we have witnessed a great response from the pool of people who came in. The balanced mix of Indian and Western pieces was particularly appealing as it showcased the versatility of the brand as a whole. I do believe, this is the route forward in made-to-measure in India, striking a harmony between heritage and British tailoring expertise. The collection will introduce washed cottons, denims, and linens and will represent our vision for a sartorial casual wardrobe.”

The 2300 sq. ft store, the third in the region, stocks the bran’s new Autumn Winter 2018 Collection and the latest festive ensemble.

The store is located at South City Mall in the city.