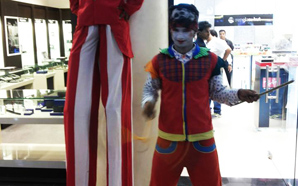 Viviana Mall, the flagship retail project by Sheth Developers & Realtors, marked one year of its operations with much fanfare and jubilation. Various festivities were set-up to create a spirit of celebrations. The in-mall entertainment included stand-up acts by Charlie Chaplin, unicyclists, stilt walkers, clowns and jugglers; luck strikes and emcee driven shop and win games. Apart from the irresistible deals offered by national and international brands across categories, consumers were also spoilt for choice with special display at the flea market.

Catering to the onset of Monsoon season, the mall collaborated with Femina for a unique monsoon fashion show which was a peep-hole to season must-haves. Workshops, special performances and an Indian Wedding Couture in association with Gili showcased designers and brands in their exclusivity. Such activities positioned the mall for its status and efforts in reaching out to the target consumer. Interactive activities kept the audience hooked.

Ashwin Sheth, Managing Director, Sheth Developers & Realtors (India) Ltd, said, "Viviana has been able to reset benchmarks in the retail industry within one year of its opening and is accredited with many firsts. We started off with 36 retailers and are now associated with over 200 retailers! It is a great sense of pride and joy for not only the mall's management but also for our customers. I am overwhelmed that our best practices have been fruitful and hope to achieve many more milestones in the coming years with the support of our staff, retailers, partners and customersâ€.

Viviana Mall also bagged an award for Emerging Developer of the Year - Retail at the National Awards for Excellence in Real Estate and Infrastructure which was an added reason for celebration.
Tags : Viviana Mall Sheth Developers & Realtors Ashwin Sheth
Advertisement