Smoke House Deli: A tribute to Kolkata's rich past

The restaurant evokes the cultural richness and charming legacy of the city with a nostalgic narrative that also appeals to a young and modern sensibility. 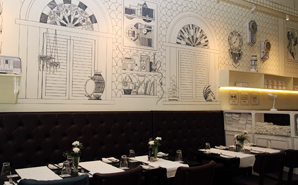 Smoke House Deli recently set its foot at the luxury shopping destination of Kolkata - the  Quest Mall, an emerging icon for the city's changes. Spread over an area of 1800 sq.ft. on the fifth floor, the full white decor invokes the customers to come in and enjoy the European cuisine offered at the restaurant. Since its inception in 2009, Smoke House Deli has grown rapidly from a single restaurant in Mumbai to nine restaurants across the country with a loyal fan base that appreciates its menu and ambience. Riyaaz Amlani, CEO & MD, Impresario, parent company of Smoke House Deli says, "Smoke House Deli is an illustrated museum of the community that it's located in. It weaves decades' worth of stories from its neighbouring lanes together to soak in the essence of the city. Kolkata itself is a magnificent city, in terms of the arts, culture and raw intellectual firepower you encounter at every walk of life. The launch of our 9th outpost in Kolkata is a tribute to the genesis of the modern day city that frames its narrative in dry wit, and proudly displays on the walls. I personally hope the city's diners will enjoy the Smoke House Deli experience in Kolkata. More so, because, this is the first time that the brand - imagined as the amalgamation of a timeless European cafe with a modern twist - is venturing into the east of India. Smoke House Deli offers a casual fine dining European Cafe ambience which is our USP and we have been welcomed with lot of affection and love in the city. We selected Quest because it is the new emerging Kolkata and we do have further plans to launch all other brands of Impresario here as well.â€ 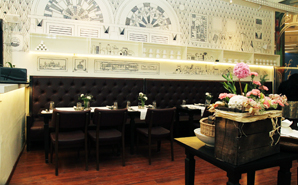 Instrumental in bringing the Kolkata edition of Smoke House Deli to life are Manjri Agarwal and Abhilasha Sethia, of Pecorino Foods who share their thoughts on the same, "We both felt that the finer nuances to the city's culture needed to be showcased in a way that's appealing to a younger, more worldly generation.â€

"The uniqueness of this fineâ€“dining restaurant is perhaps the design, especially the use of sketches which bring alive the icons of Kolkata. Being located right at the heart of the city we expect a very good footfall here at Quest because this high-end shopping destination essentially defines the new Kolkata,â€ says Manjri further, while Abhilasha continues in the same vein, "In Smoke House Deli, we found the perfect partners, with their wit, superlative fare and their ability to use decor as a means of storytelling. We're excited to be part of the iconic brand's growth story and especially their first venture in Kolkata." 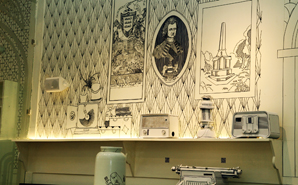 Ipsit Patel, who designed the restaurant says, "In the 30s and 50s, the glamorous side of Kolkata was associated with Jazz music. Hotels and bars flew in journeymen from around the world and had them perform and sometimes even paired them with cabaret shows. Smoke House Deli's heavy Art Deco influence is derived from memories of these evening performances, some larger than life (like the Great Gatsby) and the city's old world charm. The influence runs right through, at many levels, from the shelving to the units. The sketches that we did had to reflect the story of old Kolkata. The most interesting part was to draw these sketches using line art-form on the complete white interiors and the illustration took only fifteen days to complete and the whole dÃ©cor took four months' time.â€

The furniture, including the seating and tables, have been detailed to suit the setting. The buttoned upholstery brings alive the Colonial era. On the walls, drawings inspired by old world Calcutta share the limelight with posters and tickets to shows by Teddy Weatherford and Pam Crain, local jazz legends of the time. In addition, the city's developments by the British receive honourable mention - maps of tram routes, the first train of the East India Railway Co. and even Fort William find their way into the interior's narrative on Calcutta. 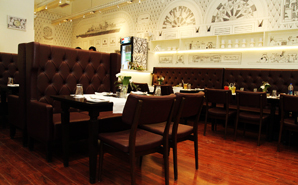 Further, the old meets the new at the Al Fresco, a contemporary dining space separated by glass partitions, on which arches are etched. The interiors are marked by high back rests and wooden room dividers. The props and artifacts complete the vintage picture -- typewriter, gramophone, old lanterns, radio sets and many more icons of a rich past.

Ipsit sums it up thus, "We have selected them keeping in mind the vintage feel, like the radio symbolize the art-deco movement and these are adding more character to the space. With each design element we have tried to connect the environment of the restaurant with the city, having a fusion of the vintage culture and the modern day cuisine in a very comfortable place.â€
Tags : Smoke House Deli Riyaaz Amlani Manjri Agarwal Abhilasha Sethia Ipsit Patel
Advertisement