How the Supermarket Has Changed in the Last 30 Years

More than any other section over the past three decades, the perimeterâ€”the area where fresh goods like produce and dairy have traditionally been on displayâ€”has evolved the most. 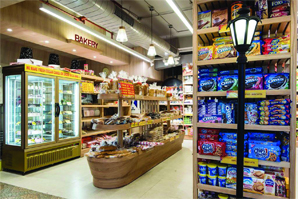 Your supermarket has seriously upgraded its offerings in the past few years—but there's also been a real change to its actual footprint. According to the Food Marketing Institute, the median total store size was 42,800 square feet in 2015, up from 35,100 square feet in 1994. More than any other section over the past three decades, the perimeter—the area where fresh goods like produce and dairy have traditionally been on display—has evolved the most. In recent years, this has become the battleground for food retailers as they fight to retain customers who are seeking more fresh and healthy options, can buy food pretty much anywhere, and are spending more online. Here's a look at how supermarkets use the perimeter to keep up.

Organics, organics: oh, and did we mention organics? Organic food sales are growing by double digits, far outpacing the rest of the industry.

And more exotic produce: As shoppers embrace more global cuisines, their appetite grows for more exotic items, from fresh chiles from Thailand to cactus paddles from Mexico, mangoes from India, and beyond.
No more cookie-cutter stores: Grocers are getting better at tailoring displays, including fruit and veggie offerings, to the demographic makeup of the neighbourhood.

More "value-added" items: Peeled and precut (and more expensive) fruits and vegetables, such as pineapple and butternut squash, save valuable prep time in the kitchen

Sample size me: From craft beer to aged cheddar, samples keep customers in the store longer and keep them coming back.

In-store production is on the rise: Departments like bakeries are making more goods in-house to signal freshness. "There's more theatre about it," says Neil Stern of consultancy McMillanDoolittle.

The rise of the “grocerant." Look for more dine-in restaurant-like options, including wine and craft beer bars, within the confines of the grocery store.

A new kind of takeout: A robust section of just-made, ready-to-heat or ready-to-eat prepared foods play on our desire for both fresh goods and quick convenience.

Bringing the outside in: Some grocers are turning the idea of the perimeter on its head. Kroger's Main & Vine concept puts all of the fresh goods in the middle of the store.

Big Food Blues One loser in the shrinking of the center of the store: Big Food, the companies that sell the boxed and bottled items that sit in those middle aisles. Since 2009, the 25 biggest food and beverage companies have lost the equivalent of $18 billion in market share. How are they responding?

• Selling "packaged fresh" items like refrigerated juices and soups.
• Investing in startups in the natural food and alternative protein space, such as General Mills' stake in plant-based yogurt maker Kite Hill.
• Reformulating or launching new products without artificial colors, flavors, preservatives, or GMOs.
• Shifting marketing focus on labels to words like "natural" rather than low-fat or low-calorie.