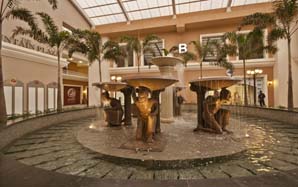 Ambuja Neotia Group unveiled yet another luxury mall in the capital city of Chhattisgarh at Vidhan Sabha Road Raipur, after the group's successful malls namely City Centre Salt Lake & New Town in Kolkata and Siliguri. Spread over 10 acres of green integrated development, Ambuja City Centre Raipur will offer 4 lakh sq ft of retail experience at the mall. The shopping experience will cater to a wide audience with a judicious retail mix across international, national and local brands. City Centre is bringing popular brands like Shopper's Stop, Pantaloons, Spencer's and Hangout for the first time ever in the city of Raipur following anchor store module. The other brands include Adidas, Nike, Puma, United Colors of Benetton,  Blackberry, Allen Sony, Presto,  Biba, Fabindia Reebok, Bata, Woodland  and such and also a plethora of eateries like CafÃ© Coffee Day, Afraa & Cream Centre.

Characterized by colourful shopping aisles leading to wide open spaces and a timeless architecture, Ambuja City Centre Raipur wants to become a complete family destination for all. Elaborating on the architectural features of the mall, noted architect Vivek Rathore explains, "Ambuja City Centre Raipur is designed as a cultural, social and business hub of future Raipur. Architecturally the mixed use development inherits the glorious past of Down Town Mall along with modern day needs like environmental consciousness and energy optimization. The mall is beckoned by a grand clock tower which holds for the new landmark of Raipur. The development is a cluster of 5 blocks juxtaposed to carve internal streets and plazas. The piazza space is a grand atrium flushed with daylight and green terraces. Being there is a celebration of senses - fragrances of alba, harmonics of fountain, drifts of daylight. There is a place for all ages and kinds at the mall.â€ 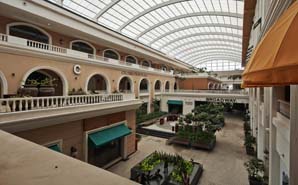 Ambuja Group intends to make this mall as a modern lifestyle destination by ensuring an efficient mall management, year-long events & promotions to attract steady footfalls and run retail promotional offers to attract serious shoppers. The proximate of the mall to a large residential catchment it will help cater to the residents of Raipur along with the growing satellite townships of the expanding city. Pramod Dwivedi, Jt. VP, Group Real Estate Marketing Ambuja Neotia said, "We have received overwhelming response and acclaim for our two City Centre malls in Kolkata and one in Siliguri and it gives me immense pleasure to extend the experience with several value additions in Ambuja City Centre in Raipur. The mall will emerge as the place to be offering a world class shopping, entertainment and dining experience to the residents of Raipur, all under the convenience of a single roof.  Having situated in an ideal location, the mall will also reinforce retailer's viability adding to the overall appeal of the mall.â€