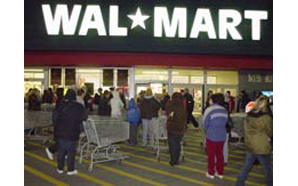 The Andhra Pradesh government and global retail major Walmart International have formed a task force to collaborate on sourcing of various agriculture commodities by the company in the state.

This was announced after a meeting between Walmart International's president and CEO David Cheesewright and AP chief minister N Chandrababu Naidu on Wednesday. The company wants to collaborate with the state government in sourcing agri products from local farmers while helping in increasing productivity and capacity building in the farm sector, according to the chief minister's office.

The task force comprising Walmart India executives and special chief secretary to government (Agriculture) Vijay Kumar would review the decisions and action plan related to the above objective once in three months and evaluate the progress, the release said. Walmart is currently sourcing cashew nuts, red chillies, coconuts and sweet lime from AP.

The chief minister suggested the company to work with agriculture and horticulture departments on identifying additional agriculture commodities, vegetables and fruits for sourcing from the state and make AP as a global hub for sourcing certain products.

The chief minister also assured the Walmart CEO that the state would extend support for cold-chain linkages and in bridging other supply gaps. He sought Walmart's technology and marketing expertise in improving productivity.