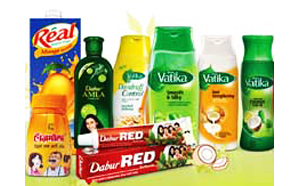 Resilient volume growth, stable margins and a good show of the international business (30 per cent of consolidated revenue) outlined Dabur's results for the March quarter. The numbers, in line with Street expectations, saw a 15.5 per cent sales growth to Rs 1,769 crore and net profit growth of 17.3 per cent, to Rs 235 crore, over the year-ago period.

The company, though, fell short on the Ebitda (earnings before interest, taxes, depreciation and amortisation) margin. While consensus estimates factored in a 40-50 basis points (bps) rise, it improved by only 10 bps to 18.9 per cent. This was due to higher advertising and publicity spending (up 40 bps to 12.9 per cent of sales), raw material cost (up 20 bps to 48.5 per cent) and employee costs (up 26 bps to 8.6 per cent). However, a fall in other expenses, along with price increases, helped offset the cost increases and improve the margins.

Unlike most its peers, which have seen shrinking volume growth trends, Dabur has maintained this at nine to 10 per cent over the past few quarters â€” it was 9.4 per cent in January-March. In FY15, it expects volumes to grow by eight to 10 per cent.

Given its consistent performance, most analysts remain positive on Dabur. Of the 16 polled by Bloomberg in April so far, nine have a Buy, six a Neutral and one a Sell rating on the stock. Their average target price of Rs 183, though, indicates only marginal gains from the current Rs 178. The stock has re-rated over the past two to three quarters and now trades at a rich 29 times FY15 estimated earnings.

Abneesh Roy, associate director, institutional equities research, Edelweiss Securities, says: "The results were really good, especially on volume growth. Dabur has launched many innovations in premium and mid products in every category. That is the reason they continue to spend on the higher side and volume growth has been strong. Dabur's investments will pay off when urban demand recovers and, hence, is a strong play on recovery.â€

Even as the management believes the first half of FY15 will be tough, they are confident of maintaining growth momentum. Sunil Duggal, chief executive officer, Dabur India, said in a post-results call, "We will be able to maintain our urban growth rates. We do not expect any improvement in consumer demand in the first half of FY15, though sentiment could improve in the second half. We believe the current growth is sustainable.â€

However, hair care (Vatika) grew a mere six per cent, largely due to continued weakness in the oil segment, partly offsetting the strong 19 per cent growth in shampoos.

"The hair oil market is under pressure and continues to witness moderation in growth. Though Vatika Olive enriched hair oil received good response, we are unlikely to get back in double-digit growth in hair oil. We believe mid to high single digit growth is more realistic in this segment,â€ says Duggal.

The foods business grew 20.6 per cent and was driven by robust double-digit growth in Real fruit juices. The company continues to enjoy a dominant position in the  segment and is positive on growth.

The international business grew a strong 19.7 per cent in the quarter. This was driven by the Gulf, Egypt and Levant (Yemen, Jordan, Lebanon & Syria) markets. Management is stepping up focus on the Africa business and expects it to form half of Namaste's revenues over the next two to three years versus 30 per cent currently. While there are near-term pressures in the North America market, the Namaste business should grow better in FY15, on the back of strong double-digit growth in Africa, believes Duggal.