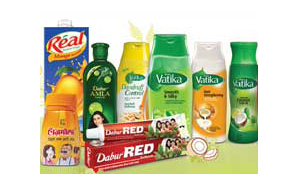 Consumer goods major Dabur India reported a 11.8 per cent increase in net profit to Rs 293 crore for the June quarter against Rs 262.46 crore in the quarter a year ago.

Dabur's domestic fast-moving consumer goods business, which gives the company about 63-65 per cent of its revenue, was flat, growing 0.5 per cent only for the June quarter. Volume growth for the domestic business was four per cent for the quarter under review, lower both sequentially (seven per cent ) and year-on- year (8.1 per cent).

On a constant-currency basis, Egypt grew 25 per cent, Nepal 27.4 per cent and Turkey 17.5 per cent, respectively. But, markets in the West Asia and Africa, where Dabur had a significant presence, struggled this quarter, analysts said. 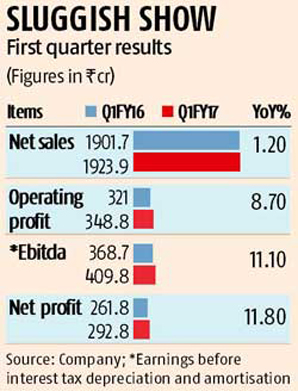 Dabur's chief executive Sunil Duggal blamed the demand slowdown and intensifying competitive pressures  in the domestic market as well as  the deteriorating geopolitical situation in West Asia and Africa for the weak set of numbers reported for the June  quarter.

"We are pursuing a prudent growth strategy and have taken steps to efficiently manage the emerging  risks  and challenges as well as protect our turf in the face of intensifying competitive pressures,â€ Duggal said.

Dabur's earnings before interest tax depreciation and amortisation (Ebitda) grew 11.1 per cent, aided  by  other (non-operating) income of ~61 crore. In the year-ago period, other income was ~47.7 crore only.

Operating profit alone grew 8.7 per cent for the quarter, aided mainly by  lower  advertising & sales promotion expenditure (down 12.5 per cent year-on-year) and material costs (down one per cent year-on-year). Other expenses, which includes distribution costs, also saw sluggish growth of 3.8 per cent only for the June quarter over the year-ago period.

Stock price dropped nearly one per cent to Rs 297.65 per unit on the BSE soon after the results were announced during afternoon trade today. It subsequently stabilised to close the  day  at Rs 307.5 per unit, up 1.37 per cent over the previous day's.
Tags : Dabur Fmcg Sunil Duggal Ebitda
Advertisement