Globally, marketplace has been the only successful model: Naren Gupta 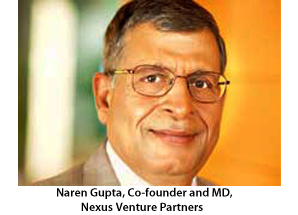 Nexus Venture Partners, with offices in Silicon Valley and India, is among the leading venture funds operating in India. Its investments in India stand at about half a billion dollars, in about 50 companies, including online marketplace Snapdeal. The fund's co-founder and managing director, Naren Gupta, who is based in Menlo Park, California, keeps his ear to the ground by travelling to India four-five times a year and talking to company managers regularly. In an interview with Indira Kannan, he talks about the Indian e-commerce market, his fund's outlook on India and its wish list from the new government. Edited excerpts:

So far, which sectors has Nexus Venture Partners primarily focused on? Do you expect that to change?

The first is technology. We look at creating companies that are globally competitive, as technology is fundamentally a global business. If cloud technology works in India, it's going to work in the US and vice versa. The second area we look at is internet companies, whether they're e-commerce or classifieds or real estate companies. We see those companies as highly oriented towards the local space and local cultures. The third area we look at is consumer and business services. We have been pretty big in education, particularly vocational education; we've been reasonably active in the health care space--- I'd call those consumer services. And, in the past, we've also owned data centres---I'd call those business services. The areas that have been hard for us, or for most western-style venture funds, are real estate, infrastructure and manufacturing.

Nexus Venture Partners is an investor in Snapdeal. How do you assess its rival Flipkart's acquisition of Myntra?

I don't know the details of this situation. The reality is you go out and evaluate and these things, by and large, just don't work out, particularly large acquisitions. I think Myntra is quite a decent-sized company. The chief executive and founder of Myntra is a very smart guy, as is the Flipkart chief; they are both very smart guys. But the odds are not in their favour, given the historical track record of acquisitions. But as investors in Snapdeal, we don't worry about that. We need to continue to grow rapidly and provide better services to customers, which we think we do. This is why Snapdeal has grown a lot faster than Flipkart or Myntra, or Flipkart and Myntra combined. We are very bullish on the company and we're going to continue to invest in the company.

How do you assess Snapdeal's performance and prospects, especially in the light of Amazon coming to India?

Amazon is not going to win in India because they're Amazon; no! They lost in China; they lost in South America and Russia; they've not been able to get any traction. So, it's not very clear that they will be hugely successful in India. I would not discount them. But the reality is they can't hire the best people because anybody who's good will be hired by Flipkart or Snapdeal or whatever. So, forget about what Amazon will do, the question really is can Snapdeal succeed? I'm going to give you my analysis on why we are a large investor in Snapdeal versus anything else.

If you look at any country, except the US and, to a certain extent, the UK, the only model that has succeeded is the marketplace model. Not the inventory-led model that Amazon, Flipkart and Myntra follow. If you look at China, the biggest company there is Alibaba. It doesn't inventory anything. And, Snapdeal is modelled much more after Alibaba than Amazon. So, the odds are in our favour. Also, I'd say Snapdeal has by far, not slightly, the best team in the business. To Flipkart's credit, it is trying to become a marketplace (model) now, but change is hard.

If you had a wish list for the new government, what would top it?

I think clarify the regulations; just make those clear, particularly the tax uncertainties. Maybe right now, we don't pay any taxes; maybe, have a nominal tax. But we need to clearly understand and have stability on those policies. So, to me, saying the Mauritius way is the right way to do it and we want to charge you many taxes, or the ideal thing will be if the government can say that we can directly invest in India; this sort of rigmarole of going through Mauritius just puts a lot of overhead on us.

I think one thing that'll help India a lot is if the new government can settle the Vodafone case quickly. And, one way to settle this will be to say 'Ok, forget about past taxes, but in exchange, you need to invest in India in a large way'â€¦something like that will be a win-win approach.

With a new government in India, do you expect any impact on your operations?

I think it's going to be positive; hard for it not to be. I think the message from the new government, (Prime Minister Narendra) Modi particularly, is focused on creating opportunities for everybody. The first impact will be the sentiment. People make decisions based on how they see the future, not so much on what's happened in the past. We are more active in India than we've ever been.
Tags : Nexus Venture Partners Snapdeal Flipkart Myntra Amazon Alibaba
Advertisement