The company\'s net standalone income during the quarter under review improved by 8.28% as Rs 13,156 cr 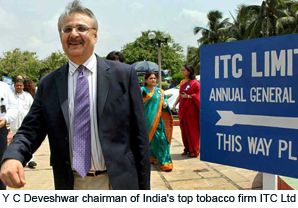 Despite weak demand in the fast-moving consumer goods (FMCG) sector and the ongoing stress in the cigarette industry, cigarette-to-hotels major ITC posted an increase of 10.1 per cent in its standalone net profit at Rs 2,385 crore for the quarter ended June.

This profit was four per cent below Bloomberg consensus estimate of Rs 2,485 crore. Net profit during the same period in 2015-16 was Rs 2,166 crore.

The company's net standalone income during the quarter, improved by 8.3 per cent: Rs 13,157 crore, against Rs 12,150 crore in the corresponding quarter in the last financial year.

Profit from operations (before other income and finance cost) came in at Rs 3,526 crore versus Rs 3,252 crore in the year-ago period, an increase of 8.4 per cent.

Among business segments, the revenue share from the cigarette business declined by one per cent in the quarter to touch Rs 8,231 crore, up 6.4 per cent year-on-year, against Rs 7,733 crore in the corresponding quarter of the past financial year.

Though the environment in the cigarettes sector, too, has been challenging, analysts expected a growth in volumes.

According to Abneesh Roy, research analyst, Edelweiss, ITC has reported positive volume growth for the first time in 12 quarters. Also, despite seizures, closed factories and delayed pricing the margins in the cigarette business, the growth was positive. However, maintaining cigarette volumes down the line could be challenging for the firm. 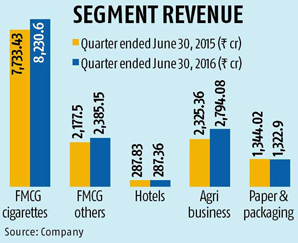 "Overall the results are in line with expectations but going forward, it is worthwhile to see how the company maintains its cigarette volume. Although higher prices will help the company maintain or increase the earnings before interest, taxes, depreciation and amortisation (Ebitda), somewhere down the line, there will be a challenge if volume falls,â€ Rahul Shah, an analyst with Motilal Oswal, said.

The company has been voicing concern on the newly introduced graphic health warnings (GHW) which covers 85 per cent of a tobacco product's packet with pictorial warnings against tobacco consumption for a while now.

"The proposed GHW is excessively large, extremely gruesome and unreasonable. There is no evidence to suggest that cigarette smoking would cause the diseases depicted in the pictures or that large GHW will lead to reduction in consumption,â€ the company said.

In the past four years, the incidence of excise duty and value added tax on cigarettes, at a per unit level, has gone up cumulatively by 118 per cent and 142 per cent, respectively, which in turn, exerted severe pressure on the sector, it said.

Its fast-moving consumer goods segment grew by 9.5 per cent amidst weak demand and deflationary price, particularly in the personal care business, while its loss before interest and tax declined to Rs 4.5 crore against Rs 8 crore in the year ago period. The share of income from the agri business to its total revenue, too, rose by two per cent at Rs 2,794 crore, against Rs 2,325 crore in the first quarter of the last financial year.

The agri business, which contributed to 21 per cent of the firm's earnings during the quarter, continued to provide strategic sourcing support to its cigarette business, besides being able to leverage its rural linkages to source wheat, chip stock potato, spices and fruit pulp at competitive prices for the branded packaged food businesses.

Revenue from the hotel business declined marginally to Rs 287.4 from Rs 287.8 crore, earned during the first quarter of the 2015-16, because of weak demand and pricing scenario.

Excessive room inventory in key domestic markets and sluggish macroeconomic environment both in India and key source markets impacted revenue in the segment.

The paperboards, paper and packaging segment, which earned Rs 1,323 crore, also faced subdued demand conditions as it declined marginally as compared to the corresponding quarter.

Zero-duty imports under Free Trade Agreement with Asean countries and cheap imports from China along with capacity expansion/ramp-up by other industry players, continued to adversely impact the paper and paperboard sector.