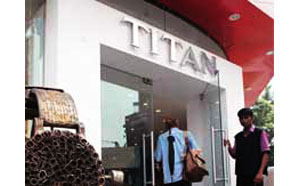 Titan entered a venture with Netherlands-based Montblanc Services BV, known for its writing instruments. Titan has a minority stake in the venture, aimed at establishing operations for Montblanc in India to carry out single-brand retail trade.

The move comes when Montblanc can enter India even without a partner as the government has allowed full ownership in single-brand retail. However, by using the venture route, it can avoid the 30 per cent mandatory sourcing norm required to get the single-brand retail licence.

It belongs to the Richemont Group that clocks 10 billion euros in revenue a year and owns several companies in the luxury goods space. Some are Cartier, Van Cleef & Arpels, Piaget, Vacheron Constantin, Jaeger-LeCoultre, IWC, Panerai and Montblanc.

Says Vivek Veda of Espirito Santo Securities, "A tie-up with a name like this brings immense benefits to Titan."

"This could help draw a few more names wanting to sign up with Titan in the country. In the tough business environment Titan is operating in, the company is doing a wise thing by leveraging its advantage of brand equity, network and retail strength, to drive topline growth."

This move to forge a JV with Richemont Group comes after Titan has licenses to retail  premium fashion watches of global brands including Tommy Hilfiger, FCUK, Timberland and Police into the Indian market. Titan is also present in multi-brand watch retailing through its'Helios' chain  that sells about 30 international brands, like Versace, Seiko, Movado, Hugo Boss, Citizen, DKNY, Roberto Cavalli, Espirit, Raymond Weil, Baume & Mercier, and Victorinox among others, in addition to its in-house brands.