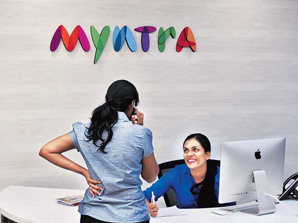 Online fashion retailer Myntra says its three-day seasonal sale last week helped it recoup the growth it lost in the two months to December after the central government's demonetisation exercise.

"The timing of the sales was interesting. I think people were looking for good deals, due to the impact of demonetisation," said Ananth Narayanan, chief executive officer.

This 'end of season sale' (EORS) is the apparel industry's usual way to clear stocks ahead of a new season. Growth in sales on Myntra and its Jabong unit had slipped to 50 per cent from 80 per cent during the preceding months, as customers who buy apparel through cash-on-delivery put off purchases in the aftermath of the currency shortage, due to withdrawal of Rs 500 and Rs 1,000 notes from circulation.

Narayanan did not quantify the value generated in the three-day sale on the platform that sold apparel with discounts of as much as 80 per cent. He said the growth would help it achieve the target of $1 billion revenue in 2016-17. Myntra saw year-on-year growth of 230 per cent in the number of orders placed and about 12.5 million user visits.

It also helped Jabong as a brand. "They just used the Myntra EORS umbrella and did not invest much in marketing. This is the ideal kind of synergy I wanted between the two companies -- a growth synergy as opposed to a cost synergy," added Narayanan.

Flipkart, which dominates India's online fashion market through Myntra and Jabong, with a two-thirds share, is looking at the fashion portals to turn profitable. Myntra has talked about being profitable by March 2018, as it cuts costs, reduces discounts and launched more private brands that earn it higher margins. For the year ending March 2016, Myntra had a loss of Rs 816 crore on revenue of Rs 1,069 crore, according to regulatory filings sourced by data firm Tofler.