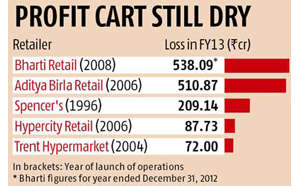 When Aditya Birla Retail launched operations with the'More' brand in 2007, it was looking to break even by 2012-13 â€” the wish remains unfulfilled. Similarly, as the Sanjiv Goenka group launched Spencer's Retail in 1990s and opened modern-format stores in 2006, it was looking at a breakeven in 2010-11. After missing two fresh goal posts, the retailer now hopes to slip out of the red in the next couple of quarters.

More and Spencer's are just two of the many supermarket chains promoted by big corporate groups that are still making losses. Sunil Mittal's Bharti Retail, Raheja-owned Hypercity and Tatas' Star Bazaar, too, are yet to turn profitable. While Star Bazaar opened its first store in 2004, it began expanding only after 2006.

According to consultants, retail ventures should ideally break even in five to six years but a tough economic environment and some not-so-prudent decisions have put paid to all efforts.

A recent CRISIL report shows that top food & grocery retailers, such as More, Bharti Retail, Hypercity and the grocery business of Reliance Retail, accumulated losses of Rs 13,000 crore in 2013-14. According to the agency's estimates, these retailers have invested about Rs 19,000 crore.

The report also shows that Avenue Supermarts, which runs D Mart stores and Future Value Retail (which runs Big Bazaar and Food Bazaar) are some major retailers that are profitable. CRISIL says Future had the first-mover advantage, while Avenue had a low-cost model. These helped them break even.

So what is holding back these chains from turning profitable?

Besides competition from kirana stores and inherent low margins in food & grocery retail, costs associated with people, property and supply chain seem to be some issues posing key challenges.

While the retailers did not respond to emails sent by Business Standard, consultants said the companies were doing many things to achieve faster profitability. Hypercity, for instance, is reducing the size of its stores from 100,000 sq ft to 40,000-50,000 sq ft and increasing the share of high-margin fashion products. Star Bazaar is also halving the size of its large format stores and coming out with mid- and small-sized outlets to achieve faster profits. Spencer's is looking to open 80 stores and focusing on improving its supply chain.

CRISIL says the top grocery retailers' losses will increase about 30 per cent in the medium term and could peak in 2017. After that, half of the players will start breaking even. Spencer's is looking to break even this financial year, while Hypercity eyes Ebitda-level profits this year. Since the developers have deep pockets and they see potential in the retailing business, they will continue to invest in retail, it said.

According to some, top-level management changes at these companies have been a major reason for a failure in keeping their strategies consistent over the years. Sanjay Badhe, former head of marketing at Aditya Birla Retail, says Birla Retail has seen too many changes in management and operations. "They need clarity in management.â€

Birla had made Sumant Sinha, the group's merger-and-acquisition specialist, CEO of the retail business at the time of launch. But Sinha quit within a year and a half and Thomas Varghese stepped in. In 2012, even Varghese was shifted to the textiles business and Pranab Barua from Aditya Birla Nuvo was brought in to replace him. Again, late last year, Vishak Kumar was named CEO of Birla's retail formats.

Reliance Retail has also changed its top leadership frequently. It debuted with Raghu Pillai as CEO of value formats but Gwyn Sundhagul, who came from Tesco, Thailand, replaced Pillai in 2010. In a major rejig the next year, Rob Cissell, former chief operating officer of Walmart China, became Reliance Retail CEO.
But Arvind Singhal, chairman of retail consultancy firm Technopak Advisors, says Reliance was firm on getting the right people on board. "Some worked, some did not. But now they have a good team in place,â€ Singhal said.

Dipankar Halder, CEO of PingStripe and former head of Bharti Retail supermarkets, believes some retailers are making losses due to their top-heavy organisations and disproportionate distribution of costs. "Successful retailers abroad pay very good salaries to store managers because they are the people who drive sales. But here, we get cheapest guys at stores and have a number of presidents and vice-presidents at the top.â€

Indian retailers had to deal with expensive properties while running their stores. Indian grocery firms pay almost double the rent retailers pay abroad. But the chains earn two-three per cent net margins in food and grocery.

"Once you build a high-cost base for rapid expansion, it is not easy to reduce expenses. The best option is scaling down operations,â€ said Devangshu Dutta, chief executive of Third Eyesight, a retail consultancy firm.

Though retailers like Aditya Birla, Reliance, Spencer's expanded aggressively between 2006 and 2010 to build scale, most of them exited unviable stores. Aditya Birla shut over 150 super market stores in the past five years, while Spencer's exited cities like Pune to focus on profitability. Even Reliance closed 50 shops and exited three formats â€” Reliance Kitchen, which sold modular kitchen furniture; Reliance Wellness, a beauty and lifestyle chain; and Delight, its non-veg products store.

There are supply-chain issues as well. According to Badhe, retailers like Star Bazaar and More are still sorting out their supply-chain issues and could see improvements soon, while Reliance has got its processes right. PingStripe's Halder says many retailers make the mistake of not treating unbranded items like fresh produce and meat as a separate category.

"You buy meat, fish and fresh produce from middlemen; obviously, the store-level profits will come down. The more you do it, the more of your profits you will have to share,â€ says Halder.

Kumar Gopalan, chief executive of retailers body Retailers Association of India, says that inability of retailers to build scale at state levels and local taxes are also posing challenges to retailers becoming profitable. "It is scale per state â€” in many cases, scale per city â€” and not scale per nation, thanks to local sales tax, local entry tax, etc. It takes time to build that kind of scale.â€ Gopalan says.

Also, the'farm to fork' strategy tried by Reliance Retail and some others did not take off the way it was expected to, as there was opposition in many states.