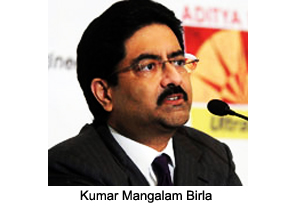 Billionaire Kumar Mangalam Birla seems to have full faith in his retail venture in spite of continued losses in the business.

Six-year-old Aditya Birla Retail (ABRL), which runs 497 supermarkets and 16 hypermarkets under the'more' brand, has seen equity infusion of Rs 1,224 crore in the last 15 months, according to rating firm ICRA. ABRL made losses of Rs 510 crore on net sales of Rs 1,037 crore in FY13. An email questionnaire sent to the company spokesperson did not elicit any response.

Consultants say Birla is putting the money where the mouth is. "Losses could be there, but Birla could be putting money as he must be seeing good growth in the business,â€ said Arvind Singhal, chairman of retail consultancy Technopak Advisors.

Another top retail consultant, who declined to be named, said since Birla has reportedly said the group was open to foreign direct investment in the venture, making the business grow and achieve a certain scale made sense. ABRL's losses fell marginally from Rs 535 crore in 2011-12, but its net sales rose eight per cent to Rs 1,037 crore against Rs 962 crore in 2011-12.

The company recently appointed Vishak Kumar, CEO of ABRL's supermarkets as chief executive of both the formats, hyper markets and supermarkets. ICRA, which recently upgraded ABRL's long-term loans, said the company's networth position has improved thanks to the equity infusion.

"The upgrade of long-term rates takes into account the equity infusion of Rs 1,224 crore over 2012-13 and Q1 of 2013-14 has eased immediate pressure on cash flows; the improving performance of ABRL's stores facilitated by continued rationalisation of operations with closure of unviable stores, cost control initiatives being undertaken by the company, along with improving sales per sq ft,â€ ICRA said.

Despite elusive profits, ABRL has no plans to slow expansion. It is considering launching six to eight hypermarkets and 40-50 supermarkets every year. Pranab Barua, the group's business director for apparel and retail business, had told Business Standard recently the retail chain has focused on profitable growth and this has reduced operating losses by about 30 per cent.

ICRA says improvement in gross margins coupled with sales growth and other cost initiatives would be critical for reducing its EBITDA (earnings before interest taxes, depreciation and ammortisation) losses.

"..In view of investment requirements going forward and cash losses, the business is likely to need further equity support in the future. ICRA derives comfort from promoters commitment to the business and their ability to bring necessary funding,â€ ICRA said.