Focused expansion has seen its share of womenswear go up than the rest of Madura's on average. Exclusive stores, e-commerce and an A-lister brand endorser have also led to sales in smaller towns 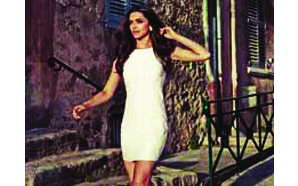 Van Heusen's renewed focus on womenswear has led to it contributing a higher percentage than the average of the parent brand. Van Heusen Woman brings in eight-nine per cent of its revenue (latest financial year), higher than the five per cent that womenswear returns for Madura Fashion and Lifestyle, on an average.

Even though Van Heusen had entered womenswear in 2007, it had not scaled up before. Van Heusen started to launch exclusive womenswear outlets in the past one year. It has nine stores and plans to add another nine-10 this financial year. The expansion plan is on the heels of Aditya Birla Nuvo's (of which Madura is a part) acquisition of Pantaloons. At the time of acquisition, Rakesh Jain, MD of Aditya Birla Nuvo had said, "The reason we acquired Pantaloons was to fill the gaps, especially in womenswear, kidswear and ethnicwear in which Madura does not have a presence."

Earlier Van Heusen Woman took up only a small section in around 100 Van Heusen stores (with the lion's share of shelf space taken up by the men's collection) and 200 shops-in-shop. "The space was very limited in the menswear section and didn't do justice to the shopping experience," says Vinay Bhopatkar, brand head of Van Heusen.

The chain plans to increase the contribution of womenswear by another five per cent in the next three to four years with stores that measure around 500-600 square-feet, situated mostly in malls.

The Van Heusen Woman stores have already broken even, according to Bhopatkar. "We have received good response so far and even the limited edition which we launched with Deepika Padukone has been doing well for the brand," he says. The limited edition also had the actor not just act as the brand ambassador, but also sit with the designers to approve the designs , according to the company. The collection was priced higher than the average product of the brand, starting at Rs 4,000 while the regular range starts from Rs 2,000.

While women's formalwear has seen an expected traction in cities with brands from Zara to Fabindia catering to the buyer, Van Heusen is also keen on tapping the demand from smaller cities and towns, something that multi-brand e-tailers have pursued so far.

"We have seen interest coming in for Van Heusen Woman from Tier-II and III cities through online sales," says Bhopatkar about the demand seen on its own e-commerce portal.

"Brands which offer formalwear in India need to get the fit right to gain a good customer base. The scope of marketing is large and capable of good growth, as the number of women working in urban areas is increasing and mindsets are changing. If Van Heusen Woman gets the fit right, then there is a good potential to grow," says Devangshu Datta, CEO of Third Eye Consultants.

Madura also has Allen Solly (with a limited women's range) and Louis Philippe that are still predominantly menswear brands. But buying the majority stake in Future Retail & Lifestyle's Pantaloons two years back is expected to fuel a shift away from such single-minded focus and Van Heusen's plan for womenswear is the first step.

Experts say Madura has to get its womenswear merchandise right, because it already has a strong sourcing and distribution set-up, to make a mark in this space - where Pantaloons can help it with enough insights. "Very few brands are available in western-wear besides the likes of Zara and Mango. If Van Heusen gets the merchandising right, it can succeed as a brand," says Arvind Singhal, chairman of Technopak Advisors. Around 60 per cent of branded apparel is womenswear of which western-wear is the fastest-growing segment, clocking a growth, faster than ethnicwear, of around 20-22 per cent on a base of Rs 10,000 crore, according to market experts.