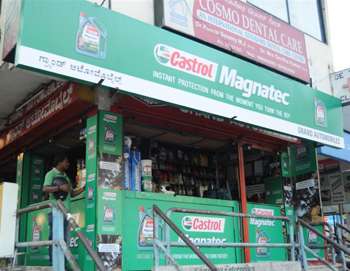 TracyLocke executed a highly effective Castrol campaign to build new brand imagery and differentiation in Bangalore. The objective was to increase the sales of Castrol in Bangalore. Speaking about the campaign, Jaya Jamrani, Group Product Manager - PCO, Castrol India said, "The Retail transformation is a critical aspect of our marketing strategy; the dedication and shared vision with which the TracyLocke team, headed by Aryan have spearheaded the project is commendable. They have been able to turnaround excellent quality work in very tight timelines, and what is most endearing to see is the sense of ownership and passion with which the TracyLocke team worked on this project. "
Top 70 outlets were identified by Castrol, which looked like any other multi-branded shops and were transformed to look elite, like any other Castrol Stores. Dealers were helped to transform their shops to achieve this benchmark by adding various elements and by changing existing structures. The outcome was that Castrol increased their sales figures manifold by capturing the retailers by converting their shops into Castrol shops. Commenting on this, Saiprasad Prabhu, Vice President, TracyLocke said, "It was very important for us that this project became successful with Bangalore being a challenging market for the Brand. We ensured that everything went smooth from the survey, to campaign execution to post campaign analysis.â€ The positive response of this campaign in Bangalore will lead the team to implement the same in Mumbai and Delhi.
Tags : TracyLocke Castrol
Advertisement