The new stores will also feature 11â€-15"Notebooks and hybrid devices (2-in1 and 3-in1 devices) which the brand has named the Transformer Series. 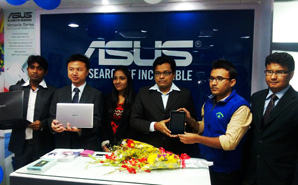 Jharkhand now gets its own ASUS stores with the launch of the brand's two exclusive stores in the state capital, Ranchi, which will showcase the company's entire range of Touch notebooks, Ultrabooks, Tablets, Phablets and Notebooks.

The launch is part of ASUS's major expansion  drive with stores already present in major Tier I and Tier II cities across the country.

Speaking on the occasion Peter Chang, Regional Head - South Asia, Country Manager - System Business Group, ASUS India said, "Jharkhand has witnessed all round development and the numbers of educational and technical institutions have multiplied in the state. Furthermore, the capital city - Ranchi is one of the rising markets of India. ASUS is delighted to increase the retail presence in the eastern India and reaching out to another state. Our state wise expansion strategy has assisted us to remarkably spread our footprints across the country at a much higher pace. We are confident that we would be able to efficiently serve our existing and prospective customers from this region as well.â€

The new stores will also feature 11â€-15â€ Notebooks and hybrid devices (2-in1 and 3-in1 devices) which they have fondly named the Transformer Series. ASUS' USP is the wide range of its technological innovations including gaming and multimedia notebooks which let the customers choose products suitable to their use and pocket, for example, their latest compact ultra-portable package retailed as the ASUS Transformer Book T100. The highlight of this creation is a hybrid quality featuring productivity of a laptop and portability of a tablet. Convenience is also a prime factor, considering how easy it is to switch between the two.