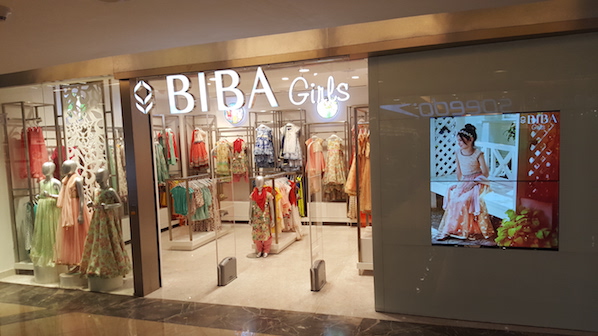 With an aggressive expansion strategy of its kids wear line, Indian ethnic wear retailer BIBA opens two exclusive BIBA Girls stores in Mumbai and Bengaluru respectively. Catering to the increased demand for kids merchandise in the age group of 2-12 years, BIBA has decided to widen their offerings to slightly older girls’ aging up to 15 years. The BIBA Girls’ stores will stock up over 75 SKU’s, thereby expanding its product line. Apart from the new standalone stores, BIBA Girls’ will continue to be available at all BIBA outlets across India. Commenting on the launch of BIBA Girls stores, Siddharth Bindra, Managing Director, BIBA said, “Initially, BIBA Girls used to be retailed out of our BIBA stores. The increasing demand for BIBA Girls amongst the customers due to its great designs and affordable pricing gave us the confidence to launch two standalone stores. We are certain that BIBA Girls will continue to grow and one can expect many more BIBA Girls outlets in the near future.”

The stores spread across 500 sq ft at Phoenix Marketcity Malls in both the cities to showcase smart ethnic wear range which includes the recently launched BIBA Girls’ Spring Summer Collection along with lehengas, jackets, anarkalis, asymmetric kurtas, palazzos, dresses, gowns, jumpsuits and shorts. Into the business for more than a decade, the exclusive store launch fall in line with BIBA’s vision of fast yet steady expansion in the country.