Bijou Kurien, Member Strategy Board - L Capital, Asia will take on the role of Chairman for the Managing Committee at the 10th edition of In-Store Asia to be held on August 4-6, 2016 at Pragati Maidan, New Delhi. 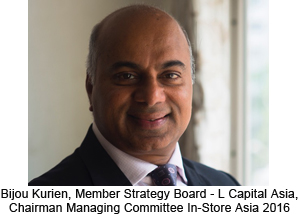 Bijou Kurien, Member Strategy Board - L Capital, Asia will take on the role of Chairman for the Managing Committee at the 10th edition of In-Store Asia to be held on August 4-6, 2016 at Pragati Maidan, New Delhi.

Bijou has been associated with marquee brands in the fast moving consumer products, consumer durables and retail industry in India for over 32 years. And his association with the development of Indian retail is over 25 years. After earning his spurs at Hindustan Unilever Ltd., he joined the founding team at Titan Industries, where he helped build powerful brands in the watch and jewellery Industry like Titan, Fastrack, Sonata, Tanishq etc and also create India's largest exclusive brand retail chains. In his stint with Reliance Retail, he was at the forefront of one of the most ambitious retail ventures ever which dramatically transformed the Indian retail landscape. Currently, he is an independent consultant and member of the Strategic Advisory Board of L Capital, Asia (a part of the LVMH Group), an independent director on several listed and unlisted companies, advises select consumer product companies and mentors a few start-ups.

Bijou has been associated with the India Retail Forum & Retailers Association of India and has significantly contributed to its development. In addition, he is also a member of the World Retail Congress since its inception, as a member of its advisory board as well as the Grand Jury for selection of the World Retail award winners.

In addition to retail industry fora, he is the Mentor of the FICCI National Retail Committee, member of the Advisory Council of the RAI and Governing boards of various academic institutions. He has also received several acknowledgements including Retail CEO of the Year (2013) by ET Now, Asia Pacific Retail Leader of the Year (2012) by the World Retail Congress etc. Amazon looks to create thousands of job opportunities in India