Group to seek FDI in listed entity after merging More, Madura Fashion with it 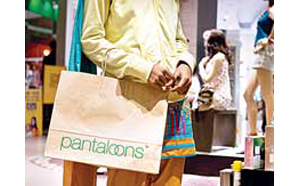 In a move to attract foreign investment in its retail business, the Aditya Birla group is likely to merge its two loss-making unlisted entities â€” Aditya Birla Retail, which runs the retail chain More, and Madura Fashion & Lifestyle â€” with Pantaloons Fashion & Retail, a listed entity.

The Pantaloons board was likely to meet as early as next week to take a call on the merger proposal, in the works for nine months, said sources familiar with the development.

The merged entity would get tax breaks because of losses suffered by Aditya Birla Retail and Madura Fashion, sources added.
At present, the Birlas own a 72.62 per cent stake in Pantaloons, which they acquired from Future Group for Rs 1,600 crore in 2012. With the merger, Pantaloons will lead the group's retail initiatives and, according to the 2013-14 financial data, create a Rs 7,200-crore sales entity.

When contacted, a spokesperson said the Aditya Birla group kept evaluating several proposals for its businesses. "If there is any development that requires a public announcement to regulators or to the stock markets, we will inform the relevant authorities,â€ the spokesperson said. "Currently, the Birlas are restructuring the businesses and have asked independent auditors to value the assets.â€

One of the issues faced by the group is attracting foreign investment in the merged entity, so that the listed entity does not breach the foreign direct investment (FDI) cap for the retail sector. At present, the government does not allow more than 26 per cent FDI, including that from foreign institutional investors, in the retail sector. 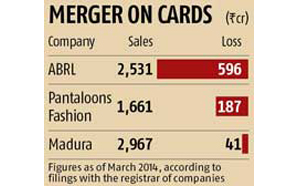 The Modi government has not changed the policy but the Economic Survey for 2014-15 says liberalising FDI in retail will help fill in the infrastructure and investment deficit in the sector.

The survey made a case for liberalisation by saying the retail sector was affected in 2013 by high retail inflation, currency fluctuations, and strict FDI policies. A source said the Birlas had sought clarifications from Sebi on the FDI/FII investments in the retail company, and whether private equity investments would breach the foreign investment norms. According to the source, private equity investors have raised concerns on whether their investment in the merged entity will lead to a breach of foreign investment cap for the retail sector, given that Pantaloons is a listed entity. It was earlier reported that L Capital, Temasek and IFC were in talks to buy stakes in the merged entity. The Birlas were planning to raise up to $500 million through stake sale. Another reason for the Birlas to seek investments is a rise in their retail businesses' losses. Pantaloon Fashion, acquired from Kishore Biyani's Future group, posted a net loss of Rs 187 crore on net sales of Rs 1,661 crore in 2013-14. Pantaloon Retail has made a loss of Rs 42.78 crore for the quarter ending December 2014 on revenues of Rs 450 crore. Pantaloon Fashion has a market cap of Rs 1,078 crore as on Thursday.