In its latest India Retail Market View Report – H1, 2017, published by CBRE South Asia Pvt. Ltd., India has topped the global Retail Development Index in 2017, overtaking China. This is indicative of the growing prominence of India as a preferred retail destination for global retail brands.

According to the report, during the first 6 months of the year, there were 70 new entries/expansions by global and domestic brands across the cities of Mumbai, Delhi-NCR and Bangalore. Seven new global brands entered the country and investments into the segment by PE Firms/Wealth Funds touched USD 200 million. Additionally, several retail developments were completed across select cities resulting in approximately 1.5 million sq ft of fresh supply entering the market. During the first half of the year, demand for quality retail space remained robust with a majority of this supply concentrated in Mumbai, Bengaluru and Delhi- NCR.

Commenting on the findings of the report, Anshuman Magazine, Chairman, India & South East Asia, CBRE said, “Our ranking on the 2017 Global Retail Index for developing countries as well as continued investment by private equity players is a demonstration of the sustained preference of international brands to set up, or expand their operations in India. With several legislations and policies on implementation mode, we are already seeing an increase in consumer and investor confidence. This will have a cascading effect on the retail segment. Overall, retail real estate will continue to grow and witness healthy demand across tier I and II cities.”

Vivek Kaul, Head, Retail Services, India for CBRE South Asia Pvt. Ltd. said, “The fact that demand for quality space continues to outstrip the supply is indicative that the retail real estate segment across key cities in India is growing exponentially. While global brands continue to evaluate and consider quality retail developments in the top cities, with growing globalization, smaller cities are also gaining prominence and witnessing traction. While there still remains some ambiguity around the highway liquor ban, resulting in F&B operators being in wait and watch mode, the overall market sentiment continues to be positive.”

During the 1st half of the year, a number of international brands already present in the country expanded their presence. Several hypermarkets too were in expansionary mode including Big Bazaar which opened new stores in Mumbai, Bengaluru and Chennai. Clothing retailers such as Max and Pantaloons were also active during the review period.

As per the report, rental trends continued to vary across key high streets in major cities during the review period. While high streets such as Connaught Place, Khan Market, and South Extension in Delhi and Park Street and Elgin Road in Kolkata witnessed a rental appreciation, rentals in most other high streets remained stable. At the same time, some high streets such as Linking Road in Mumbai and MG Road in Pune saw a marginal dip in rentals. 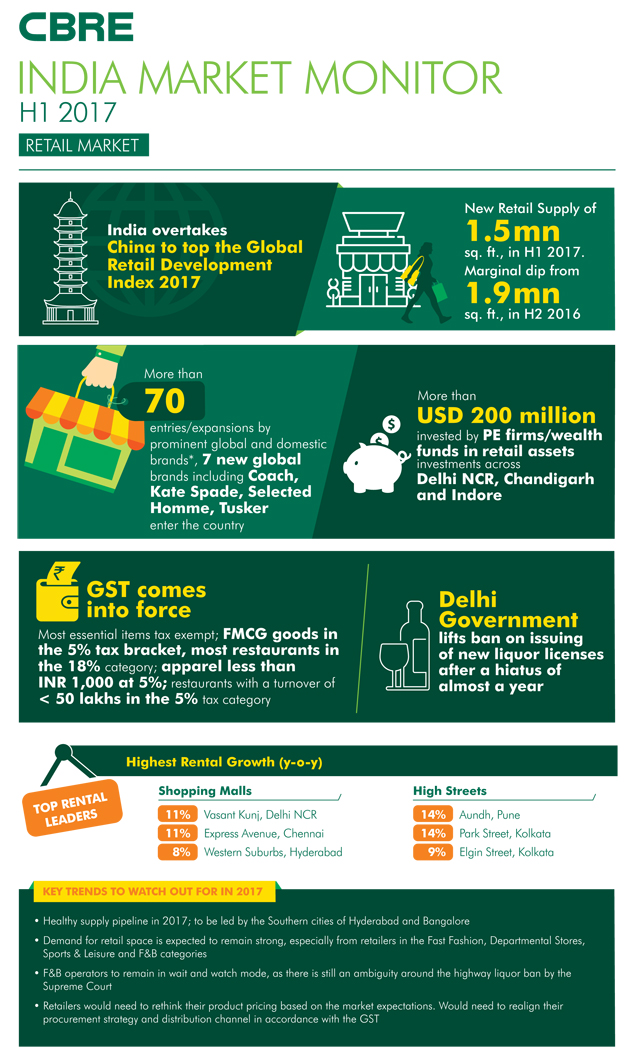