As against an industry capacity of 1.3 billion metres, the domestic demand is estimated to be around 600-700 million metres 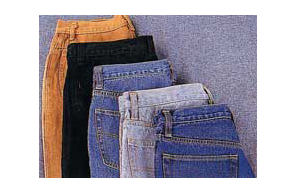 Continued addition of new capacities has further aggravated the glut in denim industry. The oversupply situation has in recent times not only laid price pressures on denim mills but also forced some to reduce capacity utilisation by 20-30 per cent. As against an industry capacity of 1.3 billion metres, the domestic demand is estimated to be around 600-700 million metres, apart from 200-300 million metres of export demand. Almost a year ago, the denim industry was functioning at a total capacity of close to one billion metres per annum. However, capacities continue to be added by existing players as well as new players. As a result, not only are denim players forced to under utilise capacities but also face price pressures.
Denim fabric prices recently fell by 5-7 per cent in certain categories of products, according to industry players. So much so that players like Ahmedabad-based Aarvee Denims & Exports Ltd (ADEL) had to opt for part production of non-denim fabric. "Our denim capacity utilisation is 70 per cent now. There has been both price and margin pressure in the industry due to over capacity in the domestic market. We are now forced to produce 30 per cent non-denim fabric,â€ said Ashish Shah, ADEL managing director. ADEL, which has an 85 million metres per annum total capacity, and had recently reduced prices by 5-7% in certain denim fabric types.
According to Deepak Chiripal, CEO of Nandan Denim Limited, erstwhile Nanda Exim, the denim arm of Chiripal Group, the company too has been facing price and margin pressures due to over capacity in the domestic industry. "Though we have not reduced prices yet, rising input costs have put pressure on us. However, it is yet to be seen if the pressure from rising input costs will be borne by denim producers or consumers,â€ said Chiripal.

"The denim industry is facing price pressure with fabric prices seeing correction in the recent past.  This has been the case with those depending mostly on domestic market,â€ said Jayesh Shah, director and CFO of Arvind Limited.