Inaugurated by the Chief Minister of West Bengal, Mamata Banerjee, the project has been executed as a public private partnership (PPP) between the Kolkata Municipal Corporation and Venkatesh Foundation. 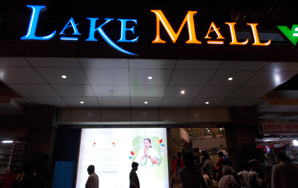 The newly inaugurated Lake Mall, strategically located at the heart of South Kolkata in the Lake Market area is spread across six floors housing 100 retail spaces, four screen multiplex spread over two floors and also the Big Bazaar Hyper Market filled with every necessary product in a sprawling area of 40,000sq.ft. The Lake Mall is the first project of Venkatesh Foundation, their real estate wing, executed as a joint-venture under Public Private Partnership (PPP) with Kolkata Municipal Corporation. Speaking at the inauguration, Mamata Banerjee, Chief Minister of West Bengal said, "The Lake Mall is a test case. This is a message to industry and business houses also.â€

For Venkatesh Foundation which was into films earlier, this move marks the entry into real estate . "We have been making films since 1995 and are proud to contribute to Bengali Cinema, but this definitely marks the beginning of our journey in real estate,â€ said Shrikant Mohta, Director-Shree Venkatesh Films.

The team from Venkatesh focused on the rehabilitation, choice of retailers, design, architecture and space allotment while the construction side has been looked after by their collaborators Space Group.  Shrikant Mohta says further in this context, "There were 350 stall holders who needed to be rehabilitated amicably and compensated and more than 70 hawkers who needed to be removed.â€
The Lake Mall is designed by architect J.P.Agarwal who created Forum, Mani Square and the coming Atria Complex on Gurusaday Road in Kolkata.
Tags : Lake Mall Mamata Banerjee Shrikant Mohta
Advertisement