More $ to flow into retail after Tesco clearance

Executives in the segment say some top European, Japanese and Korean retailers are seriously interested 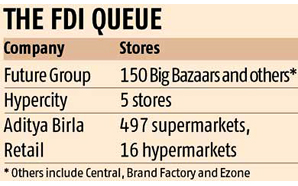 More foreign investment is likely to flow into Indian retailing after the Foreign Investment Promotion Board approved the proposed Tesco-Trent joint venture on Monday.

Executives in the segment say some top European, Japanese and Korean retailers are seriously interested. Leading the pack is French retail giant Carrefour, expected to apply to the government by March, said sources in the ministry of commerce and industry.

Hypercity and Aditya Birla have already said they're open to foreign partners in their ventures. "It (approval) paves the way for others like us to look at possible partnerships, to take it to the next logical level,â€ said Govind Shrikhande, managing director of Shoppers Stop.

Retailers were keenly observing how approvals would be given to Tesco's application to buy a 50 per cent stake in Trent Hypermarkets, run by the Tatas.

Though the government policy mentions fresh investments in Indian ventures, Tesco was investing in an existing chain, triggering a debate on whether it was investment in expansion of an existing venture or in a new one. "Earlier, it meant FDI (foreign direct investment) can come only in greenfield (new) projects. If the government has cleared this proposal, it means FDI is also allowed in brownfield (expansion of existing ventures),â€ Shrikhande said.
Said Biyani, founder and chief executive of the Future group: "We have to study the whole thing before coming to any conclusions.â€

Devangshu Dutta, chief executive of Third Eyesight, said the policy was the same and the government was still talking about fresh investment. "If any Indian retailer is looking at adding new facilities at the back end and front end and looking for FDI, the policy will benefit them, not retailers looking to capitalise on existing facilities,â€ he said.

According to a senior director of a consulting firm, some activity in retail FDI in retail will happen between now and the general elections. "But most of the action will happen after elections.â€