The store decor has a retro feel combined with a modern sensibility that showcases the collection offered by the Kolkata based designer. 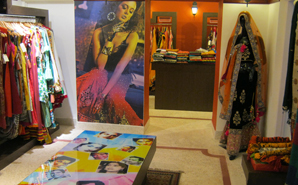 Shibapriya, the fashion label for women launched their first flagship store at Hindustan Park, Kolkata. The 750 sq.ft. fashion studio is conceptualized by Shibapriya Sen, Director of the label and Sauvik Chakravarty - Director of Graffiti Signgraphics. The interior decor of the store has been given a modern-vintage look, being positioned in an old  residential building of South Kolkata that exudes an old world charm. Strategically located in an upmarket hub of the city, the store is meant to address fashion conscious women of all ages displaying a varied range of collection starting from Indo-Western ethnic wear, sarees, kurtis and such.

Sauvik shares, "We developed the store while retaining the old-world of the house which has added a subtle cosiness and that was our whole idea. It took us about three months to complete the project, starting from conceptualization to execution.  The label's signage at the two sides of the front facade is discreet giving a very art-deco feel. At the same time to give a retro look, which is the highlight of the dÃ©cor, we have used lot of graphics and pop art especially on the false ceilings and walls. Interesting props have been used in the window display with frames highlighting the exclusive collection of Shibapriya.â€

To add to the retro theme, all the wall graphics, ceilings, sitting arrangements and the table tops in the center has been done up with faces of famous actors in a colourful backdrop. The wall graphics have been printed on leatherette which gives a textured look as a whole. In this regard Shibapriya adds, "As my clothes have got a retro theme with modern cuts, I always wanted to have that look and feel in the interiors.  Exclusivity in terms of the collection and the store decor is the USP of my store.â€

In the near future the brand aim to expand its retail footprints to other metro cities as well as B towns in the country.
Tags : Shibapriya Sauvik Chakravarty Graffiti Signgraphics
Advertisement