With the onset of summer, Nestle's Nestea Iced Tea created a refreshing and cool display unit in hypermarkets. 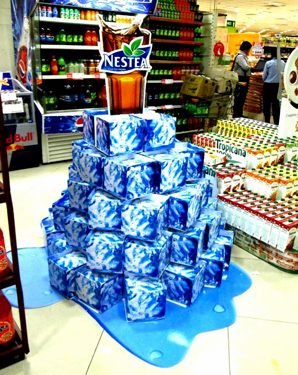 Ensuring continued shopper loyalty is the most challenging task for any brand especially with regard to its consumers who are picky and addicted to a certain flavor and colour. With this in mind, the Nestle team planned to rework the rudiments of the overall visibility of Nestea Iced Tea at retail, with the aim of reiterating brand recall.

The Nestle brand team collaborated with The Classic Display Systems Pvt Ltd and the latter proposed an overall POSM solution after studying consumer behaviour and analyzing the overall retail scenario at present.
Says Raj Nandan, Business Head, Classic Display Systems, "Our sole purpose was to highlight coolness of the product through the use of ice-cubes.  This was intended to denote summer refreshment.â€

The material employed while constructing the units was PP corrugated so that the unit could be made and sent in a knock-down condition. Also, inkjet print and MDF was employed to make the unit sturdy enough in an upright position at retail.

Choosing the right materials for the unit was critical in order to ensure transportation in a knocked-down condition and also save on costs. Also, each ice cube was transported separately to the store, which was a difficult task. Besides, the unit had to be assembled in such a manner that it fit in the space provided at the store. The final challenge was also to allow entire visibility of the floor stack to a shopper from distance. This had to be borne in mind while implementing the plan. The entire project, starting from fabrication to execution, was planned and implemented by the in-house team of Classic Display in just three weeks.

The project was executed pan India and the units were deployed in hypermarkets such as Spencer's and Reliance stores at Bangalore, Chennai, Delhi & NCR, Hyderabad, Kolkata, Mumbai and  Pune.

The efforts have obviously borne fruit for Nestea. Says Nandan, "The fact that the brand is interested in building the categories and not just blocking the space with stocking units has fortified its position in the retail division of the FMCG market. Our prime aim was to invite and engage a shopper with the brand. Our team has certainly accomplished this goal.â€