Biyani ties up with Tata-Tesco chain to supply Future brands 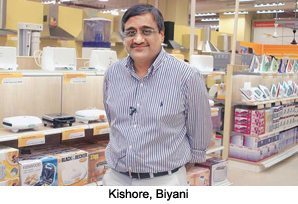 In what can be described as the coming together of two rival retailers, Kishore Biyani's Future group has tied up with Trent Hypermarket, a joint venture of Tata group's Trent and UK-based Tesco.

The agreement will enable Future Consumer Enterprise, a consumer goods company of the Future group, to supply its own brands in foods and non-foods category to Trent Hypermarket. This comes right after Future's mega marketing deal with Baba Ramdev's Patanjali.

Star Bazaar, the chain operated by Trent Hypermarkets, would launch 148 products from 10 brands of Future Consumer Enterprise, under the pact.

"We are expecting a 8-10 per cent shelf share in Star Bazaar stores,â€ Biyani said at the event organised to announce the tie-up. The group is in talks with other chains as well. "We want to be become one of the top three FMCG (fast-moving consumer goods) companies in the country,â€ he said.

Biyani expects Future Consumer Enterprise to become a Rs 4,000-crore company by FY17. Its revenues were pegged at Rs 1,082 crore in FY15.

Analysts said the tie-up with Star Bazaar was part of the group's plan to become a Rs 20,000-crore FMCG company by 2021 and open a new distribution avenue for the firm.

Future has appointed a distributor in Varanasi for Tasty Treat and for selling to 6,000 traders in the region. Biyani said the company would appoint such distributors in other regions, too.

Star Bazaar operates 22 stores in Maharashtra and Karnataka, which are among the states to have allowed foreign direct investment in multi-brand retail. Tesco, which is the part-owner of Star Bazaar, is the only international chain to be present in the multi-brand category in India, but till now has operations just in Maharashtra and Karnataka.
Tags : Kishore Biyani Star Bazaar Future Retail Baba Ramdev Patanjali Ayurveda Trent Hypermarket Future Consumer Kishore Biyani future Retail Companies News
Advertisement