Say if next govt doesn't allow FDI, only JVs will stop, other options remain open 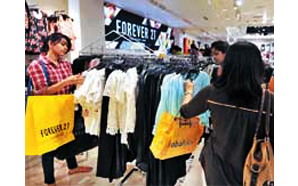 Domestic retailers, earlier looking to get foreign direct investment (FDI) in their ventures, say they are ready to explore options in case the Bharatiya Janata Party (BJP) comes to power and prohibits FDI in multi-brand retail.


In its manifesto for the Lok Sabha elections, released on Monday, the BJP had opposed FDI in multi-brand retail.

"We have to study the policy in totality and take a call. Even if the next government does not allow FDI in retail, only the joint venture route will stop; other options will continue,â€ said Kishore Biyani, founder of Future Group, which runs Big Bazaar, eZone, Home Town, etc. "We have to see who will form the government and what policy it will announce. If FDI in multi-brand isn't allowed by the next government, that is an opportunity to prosper (for domestic chains).â€

In an interview with Business Standard in October 2013, Biyani had said he didn't think many domestic companies were banking on FDI in retail. "Foreign money will come through private equity, through Press Notes 2, 3 and 4,â€ he had said.

Venugopal Dhoot, chairman of Videocon Group, which was considering bringing foreign investors into its Next chain, said, "We will have to wait till the government of the day clears it.â€

Executives of Raheja-owned Shoppers Stop, another retailer keen to partner foreign retailers for its Hypercity, could not be contacted.

Arvind Singhal, chairman of retail consultancy Technopak Advisors, says not much should be read into the BJP manifesto. "All depends on how strong the next government is; if it is strong, it can take bold steps,â€ he said.

He believes after a new government takes charge, India will see a new policy for FDI in multi-brand retail. "The FDI policy is badly designed. That is why we have not seen many applicants. I think a new policy will not happen in the first two to three months. But eventually, a new policy, which is acceptable to all, will be brought out,â€ he said.

Since the Centre allowed FDI in multi-brand retail in September 2013, the UK's Tesco has been the only foreign brand to apply for an entry into the sector. A mandatory clearance from the government of the state the retailer wants to enter and local sourcing are said to be among the key reasons that have dissuaded foreign retailers.