High performing brands such as Zara, Pantaloons and Mango expect beyond 40 per cent. 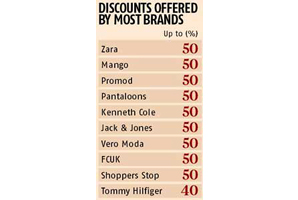 Sugandh Ahlawat, 27, a homemaker and mother of a one-year-old girl, is a regular shopper at malls across Delhi. She spent Rs 20,000 on the first weekend of the end-of-season sale. Excited by the discounts offered, she filled her shopping bags with boots, winter coats and clothes for her daughter.

The winter end-of-season sale has started on a high note for most leading malls. With most brands offering discounts of 20-50 per cent, retailers expect the sale to outdo the July 2013 end-season one. According to insiders, the buyer enthusiasm continues and most brands expect sales to spike by 15-30 per cent, on an average. High performing brands such as Zara, Pantaloons and Mango expect beyond 40 per cent.

Brands such as Vero Moda, Jack & Jones, Kenneth Cole, Zara, Mango, Pantaloons and Marks & Spencer's are offering discounts of 40-50 per cent. Apparel and shoes are expected to be the best performing categories, say experts.

"The trend over the years has been that the January sale is better in terms of higher sales. This is because winter wear like coats, jackets and boots are higher-ticket items. We are confident of surpassing the July end-season sales," said Yogeshwar Sharma, chief operating officer, Select City Walk Delhi.

Rajat Malla, centre director, Phoenix Market City, Pune, says most brands have had a good response so far. "We expect the footfalls to spike up to 15 per cent, with a hike in sales by 25-30 per cent," he says. Sector insiders predict the food and beverages category to be one of the best performing after apparel and shoes.

Pacific Mall in Delhi expects 1.2 million people during the sale period in January, compared to about 900,000 during the same period last year, according to its executive director, Abhishek Bansal.