Mukesh Bansal, Founder & CEO of Myntra, acquired by Flipkart earlier this year, will get marketing, too 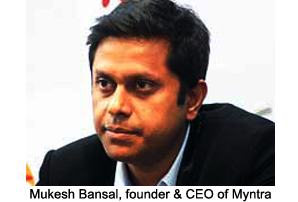 E-commerce major Flipkart on Monday announced a top-level restructuring, giving more responsibilities to Mukesh Bansal, Founder and CEO of Myntra, which was acquired by Flipkart earlier this year. Also, the company has given additional responsibilities to Ankit Nagori, vice-president (marketplace), at Flipkart.

According to an email that was sent to top officials at the company, Bansal, who was so far heading Flipkart's fashion segment, will now head marketing, too. He will also take care of certain 'super categories' such as computers, communication and consumer electronics, which are the hottest segments for the e-tailing giant.

The company also said that Kalyan Krishnamurthy, who had come to Flipkart from investor Tiger Global as an interim chief financial officer, will now return to the venture capital firm. This development comes after Flipkart appointed Tata Communications' former Chief Financial Officer (CFO) Sanjay Baweja as its finance head in September.

Krishnamurthy, who is Director of Finance for portfolio companies at Tiger Global, had taken on the interim CFO role at Flipkart after Karandeep Singh quit as head of finance in January last year.

"Realigning roles and responsibilities help us keep pace with our aggressive growth and the dynamic environment we operate in," the company said in a statement.
Tags : E-commerce Flipkart Myntra Tata Communications
Advertisement