According to the report, e-commerce allows small retailers to become'micro-multinationals' -- small businesses with global customers. 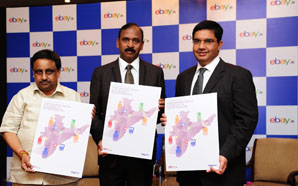 eBay India has presented the e-Commerce 3.0 report in Delhi to showcase the impact of internet-enabled trade in the country. The report provides insights on how Indian merchants trade nationally and internationally through online channels thereby contributing significantly to the Indian economy and contrasts it with the dynamics of traditional trade. The report explains the critical role of new technologies in revolutionizing the way Indians buy and sell. It also highlights eBay's commitment towards contributing to the evolution of e-commerce in India, thereby improving the lives of millions through Internet-enabled trade.

Speaking during the occasion, Latif Nathani, Managing Director, eBay India, said, "We, at eBay India are committed towards fostering the growth of Indian e-commerce by enabling merchants of all sizes to trade nationally and globally on a level playing field. Through this report, we aim to highlight the abundant opportunities offered by internet-enabled trade to millions of small & medium enterprises in the country. E-commerce allows small retailers to become "micromultinationals,â€ small businesses with global customers.â€
The Key findings of the COMMERCE 3.0 report are: