Login
Home » News » Retail » Now over the hill, a Future for Nilgiris

Now over the hill, a Future for Nilgiris 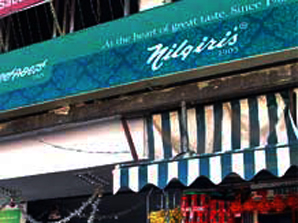 When quizzed on whether Nilgiris, the south India-based supermarket chain recently bought over by Future Consumer Enterprise, would be rebranded or not, Future Group chief executive and founder Kishore Biyani says, "Not at all, we bought it for the brand." There had been speculation, with the acquisition in the works from earlier this year that the chain might be rebranded as KB's FairPrice, which is a small grocery chain.

In a way, Biyani would relate to Nilgiris. If he was an apparel manufacturer who made it big in retail, the Nilgiris-founder, Muthuswami Mudaliar, was a milk supplier who went on to set up one of India's earliest modern retail chains.

Today it has 140, mostly-franchisee stores in Karnataka, Tamil Nadu, Kerala and Andhra Pradesh. Though Mudaliyar used to supply milk and other dairy products since 1905, the first store of the chain was set up in Brigade Road in Bengaluru in 1936. Initially, the chain started by selling milk and bakery products that the women of the owner-family would pack and decorate themselves. But once Mudaliar's son, Chenniappan Mudaliar, came back from the US after studying its supermarkets, the look and feel of the stores, from merchandise to supply chain, changed. Groceries and vegetables were added to the spread and Nilgiris became the first self-service supermarket in the country.

Susil Dungarwal, founder of the mall management consultancy, Beyond Squarefeet, and a customer of Nilgiris since childhood, says it was the first chain to import cook and bakeware and Indianise them: "It invested a lot of money in standardising the supply chain and cooking styles in its merchandise spread". Nilgiris is also credited for being the first supermarket chain to import point of sale machines for billing, when it was still unheard of.

It is said that the fourth generation of the promoter family was unwilling to take up the supermarket business, when the earlier generation, comprising Chenniappan, would arrive at their flagship Bengaluru store in the wee hours of morning and leave only after the last customer stepped out. By the time Reliance Retail and Bharti stepped into the field, the family was sorely lacking in the management bandwidth required to match their scale, despite the headstart it had in India's strongest region for modern trade. What was earlier a progressive chain, found itself without the professional touch and systems to attract the right talent.

The Nilgiris' promoter family sold off 65 per cent of its stake in the holding company, Nilgiri Dairy Farm, to UK-based private equity (PE) firm, Actis, in 2006 for $65 million (Rs 300 crore). Nilgiris had 30 stores.

The PE firm brought in a professional management, expanded the stores with new plans for store and shelf lay-outs and inventory management systems. To contemporise and freshen up the chain, Actis brought in health foods such as flavoured yogurt and increased other product variety such as eight different kinds of bread from just white bread earlier.

But within a year, the tie went sour. Actis started looking for offloading some of its stake through an IPO. When it did not happen, it started looking for buyers in other PE funds and retailers. It eventually held talks with international retailers such as 7-Eleven and Tesco in late-2012, but they were spooked by the lack of clarity in FDI norms, valuation and the reluctance of the founder family to sell any more shares. There were also disagreements over expansion plans, with the family opposing large-format stores measuring 2,000-3,000 sq-ft. The latter went to the Company Law Board when Actis floated a Rs 35-crore rights issue and withdrew it only after Actis acceded to reverting to the smaller stores of not more than 1,000 sq-ft and promised to bolster its private-label bakery and dairy business (the original product lines of the chain). So, the scalabilty was shot for a lucrative PE exit.

Advantage lost
Bijou Kurien, former chief executive of Reliance Retail, says the contemporisation was not enough, "When others were already selling masala milk and smoothies at supermarkets, Nilgiris stuck to plain assortments in a category it began with." Biyani says that he would launch new dairy products and explore how best to cross-sell products from other chains of the acquiring company, Future Consumer Enterprise (such as Green Apple, KB's Fairprice) in Nilgiris and vice-versa.

Before Biyani bought Nilgiris for Rs 300 crore, it was on the block for almost two years with a price-tag of Rs 600 crore. The obvious benefit of Nilgiris, which clocked Rs 765 crore in FY-14, would be to expand Future Group's negligible southern presence. Though it runs around 230 Big Bazaar and Food Bazaars, south India houses only a fifth of the count.

Devanghsu Dutta, CEO of retail consultancy, Third Eyesight, says, "India's practices in modern retail evolution began in south India with Spencer's in its first avatar and Nilgiris. The control of bakery and dairy by retail chains (in-house brands) was learnt from Nilgiris. It still has the trust of old-timers, but newcomers to southern cities have been won over by its competition."

Nilgiris still stocks nearly 6,000 products with low supply chain costs and a robust franchisee model. With its own manufacturing in dairy and bakery, around 26 to 27 per cent of its revenues come from private labels, that could prove profitable if Biyani can turn around the chain.