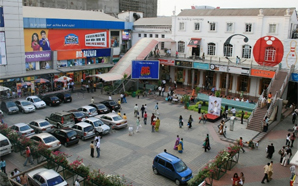 Fresh after a joint venture (JV) with Canadian pension fund manager CPPIB, Phoenix Mills is looking to double its mall portfolio with investments of Rs 3,500-4,000 crore.

CPPIB recently said it will own up to 49 per cent in Island Star Mall Developers, a subsidiary of Phoenix Mills that owns Phoenix MarketCity in Bengaluru.


It would invest Rs 1,600 crore in the mall, which would serve as a joint platform to buy and develop new malls.

“The new platform will be our growth vehicle for this pool of capital. The Rs 1,600 crore equity investments will be further leveraged,” said Atul Ruia, joint managing director, Phoenix Mills. He said they could leverage twice on the equity base.

Ruia said they were evaluating opportunities in Hyderabad, Ahmedabad, and Kolkata, and tier-II cities such as Lucknow and Indore.

The mall was bought in an auction conducted by JM Financial Asset Reconstruction Company.

Ruia said they were evaluating the possibility to bring the acquired mall under the newly-formed joint platform with CPPIB.