While footfalls have fallen after the long period of discounts, retail chains are being forced to continue selling discounted merchandise, as new stock is yet to arrive 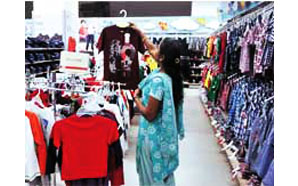 This year, the season of retail discounts had begun early. But now, it seems the strategy has backfired. Used to discounts, shoppers of apparel and fashion wear aren't willing to spend when prices aren't slashed anymore.

While footfalls have fallen after the long period of discounts, retail chains are being forced to continue selling discounted merchandise, as new stock is yet to arrive.

This year, most departmental stores such as Central and Shoppers Stop had advanced their sale periods by 10-15 days and had started the discounts in the first week of January. Last year, the discounts were effected from mid-January to the third week of February, making these compact sales.

Due to prolonged discounted sales, shoppers are increasingly becoming averse to buying full-priced merchandise, at least during the initial days of the non-sale period, say executives at many retail stores. As a result, footfalls and sales have declined by a third at many places.

"Last week, we ended our discounted sale, during which customers bought merchandise in big numbers. It will take at least 10-15 days for sales to pick up," said a customer associate at a ColorPlus store in a South Mumbai mall.

At the same mall, a sales associate at a Pantaloons store said, "We are seeing lesser shoppers after the sale period. During the sale, there was a virtual stampede at our store."

Jaydeep Shetty, chief executive of women's wear chain Mineral, said: "For us, it will take at least a week to fill up the stock. Most retailers like us are selling 65-70 per cent of the new stockâ€¦Production facilities are not geared up to advance deliveries." Shetty believes prolonged discounts will impact full-priced sales and increase the prices of merchandise, as retailers have taken a hit on their margins.

Susil Dungarwal, founder and chief mall mechanic at mall management firm Beyond Squarefeet, says, "I think from mid-February to the first week of April, by when examinations will be over, footfalls and sales will be lower."

* Retail stores seeing 30-40% decline in sales after the discount

* Most retailers are selling discounted stuff even after the sale period