Snapdeal gets $500 mn from Alibaba, SoftBank and Foxconn, eBay divests part of stake 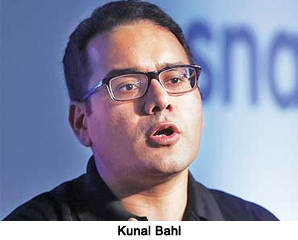 After months of speculation, e-commerce firm Snapdeal has announced that it has received $500 million from Alibaba Group, Foxconn and SoftBank even as eBay has divested part of its stake in the company.

The company had received total funds of $1 billion with SoftBank pumping in $627 million in 2014. This is the first round of fund infusion that Snapdeal has received in the current calender year in which its existing investors Temasek, BlackRock, Myriad and Premji Invest have also participated. The new investors are said to have bought some new as well as part of eBay's stake in Snapdeal.

According to market estimates, the funding has come at a valuation of $5 billion, which has more than doubled from last year when SoftBank invested.

US-based online marketplace eBay, which held nine per cent stake in Snapdeal has said it is divesting a portion of its stake in Snapdeal. In a statement, eBay said, "Over the past two years, the valuation of Snapdeal has significantly increased, and because eBay was an early investor, this sale will enable us to earn a strong return on our invested capital and strategically redeploy it into other areas of our business.â€

"While we will retain a significant portion of our original investment in Snapdeal, we also have a strong, healthy business with eBay.in, a leading online marketplace and shopping destination in Indiaâ€¦â€ The company, one of the early entrants in the Indian e-commerce space, will focus on accelerating eBay's web presence in India.

Without commenting on the eBay sale, Snapdeal Co-Founder and CEO Kunal Bahl said that the company sees the latest round of investment "as a significant endorsement of Snapdeal's strategy and commitment to create life changing experiences for millions of small businesses and consumers in India.â€

News agency Reuters said that FIH Mobile, a unit of Taiwan's Foxconn, the trading name of Hon Hai Precision Industry Co, said it was buying a 4.3 per cent stake in Snapdeal for $200 million via its Singapore-based subsidiary Wonderful Stars Pte.

Snapdeal, which had a gross merchandise value (GMV) of $2 billion at the end of 2014, is aiming for $10 billion in GMV by the end of this calendar year.

For Alibaba, this will be its second investment in an Indian e-commerce platform. The e-commerce giant already owns a 25 per cent stake in digital payments and e-commerce firm Paytm, through Ant Financial Services which is likely to go up to 40 per cent. The talks with Alibaba are said to have "fallen offâ€ due to high valuations being sought by Snapdeal earlier this year. During the first time, the deal was being pegged at $500-700 million. It was speculated that Alibaba was valuing the Indian firm in the range of $4-5 billion, compared with the $6-7 billion that Snapdeal was seeking.