The e-commerce portal will be owned and managed by Fiora Hypermarket, a subsidiary of Trent Ltd 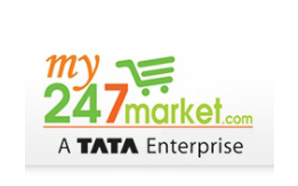 The Tata Group has launched an online grocery platform my247market.com, which will compete with sites such as Localbanya.com, BigBasket.com and the online version of Godrej Nature's Basket.

The portal will be owned and managed by Fiora Hypermarket, a subsidiary of Trent Ltd, which owns Star Bazaar stores in Gujarat and Tamil Nadu. The portal will sell fruits, vegetables, staples, meat, bakery and dairy products. It will also sell packaged food, beverages, confectionery, baby care products and so on.

Initially, the portal will deliver in Mumbai and later extend to other cities, according to sources in the know. Star Bazaar, a joint venture between Tata and Tesco, is supply chain partner for the venture and the portal will sell private labels of Star Bazaar, which are 15-20 per cent cheaper than national brands, as well an exclusive range of Tesco products.

"While there is no doubt about the convenience that online grocery shopping has to offer to customers, we felt customers sought trust, reliability, quality and service through their online shopping experience and these weren't adequately met through the existing choices available to them,â€ says a note on the my247market.com website.

The online grocery space is hotting up with gourmet chain Godrej Nature's Basket recently acquiring Ekstop.com and integrating operations with itself.

Nature's Basket has tied up with e-commerce portal Snapdeal to sell products in 5,000 cities and launch an e-commerce marketplace soon in cities where its stores are not present. Online marketplace Amazon launched KiranaNow, and Flipkart is reportedly going to make a foray into the grocery market in the later half of this year. In November 2014, Reliance Industries' retail arm Reliance Retail had launched an online service, RelianceFreshDirect, to deliver grocery products in some neighbourhoods of Mumbai.

The Tata group has bigger e-commerce plans. It has roped in Ashutosh Pandey, former chief operating officer at bookstore chain Landmark, as the head. Sarvesh Dwivedi, who led the lifestyle division of Ebay India, has also been roped in.

The group's existing e-commerce platforms for the retail ventures Croma and Landmark could be merged once the marketplace model e-commerce is launched. However, the Tata group will face stiff competition from Flipkart, Amazon and Snapdeal, which have already established their presence in the market.