Coca-Cola launched its international soft drink Coca-Cola Zero in India crafted with special retail strategies both online and offline markets. Even while catering to the Indian market, the brand has kept the global feel of the product and its promotion. GV Displays Solutions Pvt Ltd has handled the retail branding for the launch. 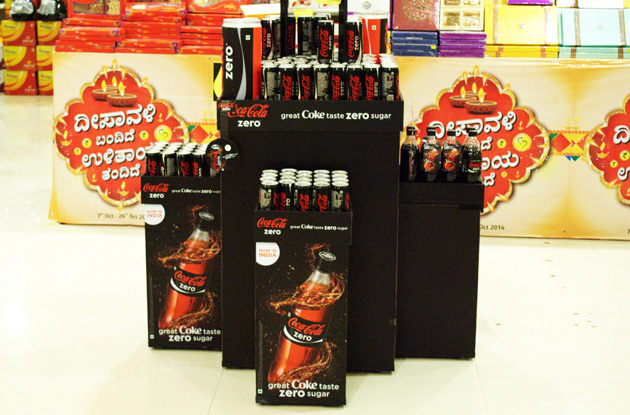 Coca-Cola Zero, a sugar-free beverage of Coca-Cola has been launched in India and the brand has decided to launch in different steps in the retail market. The company has planned to distribute the product in the top 100 towns and more than 180,000 outlets, both in traditional as well as modern trade. However, the retail activity has been kicked off in phases, starting with Modern Trade and followed with traditional trade marketing. Considering the target audience of the product i.e. age group of 18-29 years, the product has been made available mainly in the cities which contribute almost 90 per cent of the SEC A urban population.

Interestingly the brand has designed the retail strategy quite uniquely in several stages. To start with Coca-Cola has tied up exclusively with Reliance Retail chain outlets in different markets and Coke Zero has been stock in their retail stores only. To announce the big launch and capture the buyers' attention, the brand has executed an aggressive retail branding inside retail chain stores.

The brief of the branding given to GV Displays was quite straightforward. The idea was to announce the launch in an eye-catching manner which should be theme based, communicating about the features and USP of the Coca-Cola Zero i.e. light and sugar free.  As this product is a decade old abroad, the brand didn't want it to launch in a conventional way in India but wanted to retain the international essence. Going by the brief, the GV displays ideated several themes, out of which few got rejected and few were redesigned. However at last, two innovative designs were executed. Such as:

Apart from these two, the company designed other POSs as well for the promotion purpose.  Coca-Cola had also tied-up with e-commerce giant Amazon India to launch Coca-Cola Zero exclusive on its platform for pre-orders for two weeks in September. The brand objective behind this tie-up was to make the product familiar with Indians who are pretty aggressive on online retail portals.

There were numerous challenges that GV Displays had to deal with. Starting from the ideating themes and concepts, the solution provider brainstormed lot of concepts and executed a test run on them. On inverted pyramid, the biggest challenge was to make it stand firmly as due to round pipe in it in the sample. To make it stable, square pipes were used. In Island Rack, commutation was a big task as it had to be transported to other city-based retail stores. They made it collapsible after which it got 100 per cent flat pack and making it easier to transport.
"This was an important project for us. We spent 2-3 months on finalising designs, making structures and execution in different cities like Delhi, Chennai, Bangalore, etc. Considering the scale of the launch, we designed various structures which extended our capabilities also. Also there was big support from the Coca-Cola, especially Nikhil Yagnic and Sandeep Jain. They equally supported us at each step and visited our factory a couple of times to accelerate the work,â€ shared Shreesh Sharma, Director, GV Displays.
Tags : Coca-Cola Zero GV Displays Pvt Ltd
Advertisement