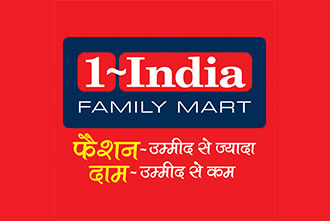 1-India Family Mart started operating with two stores in UP’s Ghazipur and Fatehpur district in a comparatively smaller area. It gradually expanded operations across Bihar, Jharkhand, Chhattisgarh and the North East with larger stores.
Speaking on the successful operations of all their 90 stores, Ravinder Singh, Co-founder & COO 1-India Family Mart said, “We are delighted to bring the next level of retail experience to our customers in these 82 cities. The encouraging response garnered by all the existing stores indicates the increasing demand for affordable fresh fashion and general merchandise among the aspirational class in India. Witnessing such increasing demand and potential in tier-2, tier-3, and tier 4 cities, we are planning to add more stores by 2020, which will drive us towards our ultimate vision of addressing the fashion needs of 75% of the country’s population.”

1-India Family Mart reportedly raised its first external funding worth US$ 7 million from Carpediem Advisors in 2018 for investing in expansion, technology, CRM, warehousing and storefront training. The firm has also recently raised its second round of external debt funding worth Rs 20 crores. 1-India Family Mart will now leverage the amount for expanding to newer geographies by adding up 40 stores in the current year and 50 stores by 2021.

The raised amount will be allocated primarily for opening new stores as well as for working capital requirements of the company.

The store, which stocks around 800 SKUs, brings leading Karnataka Cooperative brands like Nandini, Mysore Sandal, Safal, Campco and other local brands under one roof.