HUL has the maximum number of Rs 2,000-cr plus brands in the FMCG market Others are slowly catching up 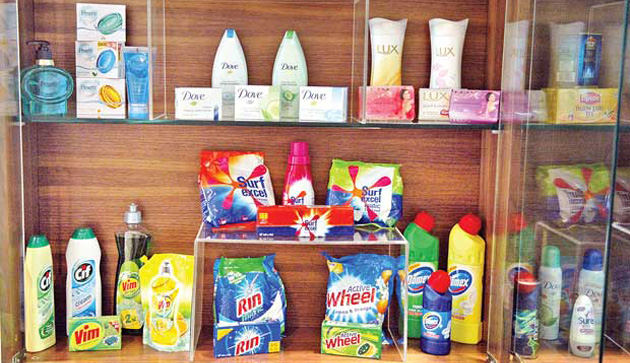 The fiscal gone by has seen Hindustan Unilever (HUL), the country's largest consumer goods company, achieve two milestones. The first: It touched Rs 30,000 crore in topline. Second: It emerged as the one with the most number of Rs 2,000-crore-plus brands. Five of HUL's top brands belong to the club: Lifebuoy, the country's largest soap brand; Surf, Rin, and Wheel, all laundry brands, and Fair & Lovely, the largest selling fairness cream in India.

While ITC is also home to several blockbuster brands, all of these, say analysts, are part of its cigarettes portfolio. The latter gives ITC over 60 per cent of its gross revenues (FY14 gross revenues are Rs 46,712.62 crore; break-up at net sales level not given). ITC's non-cigarette FMCG business, which is Rs 8,122 crore in size (according to its FY14 balance sheet), has a few likely contenders for membership to the Rs 2,000-crore club. Brands such as Aashirwad and Sunfeast could make the list, according to analysts. However, the company has not indicated this or given a detailed break-up in its last annual report.

Some other products in the larger FMCG universe that are valued at Rs 2,000-crore and above include Dettol, Parle-G, Maggi, Parachute, Britannia Good Day as well as Marie, Colgate, Ghari, Tata Tea, Waghbakri and Ariel (from Procter & Gamble). But analysts say, most of these have a single brand in the category unlike HUL which has multiple such brands and therefore is an outlier. Gautam Duggad, vice-president, research (FMCG & Retail), Motilal Oswal, says, "HUL is the only company with the most Rs 2,000-crore plus brands. If you look at pure FMCG, while some companies are getting there, it would take time for many others to build a portfolio the way it has." 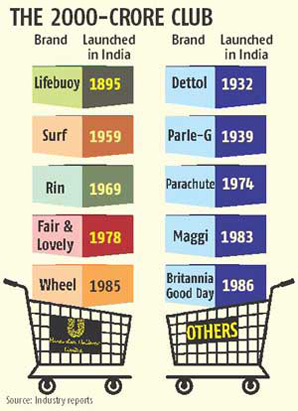 HUL has taken its time getting there, however. The Rs 2,000-crore-plus brands have not crossed the distance in a jiffy. Some such as Lifebuoy have been around for 120 years in India (it was launched in 1895 in the country by England's Lever Brothers). The HUL management pins this down to the country's competitive landscape. Sanjiv Mehta, MD and CEO, HUL, said when announcing his company's fourth-quarter results, "Competitive intensity remains high and the environment is challenging. In the last one year, volume growth for the FMCG market has been under one per cent. Value market growth has been between 5 and 6 per cent. If you compare this with previous periods, growth then was higher than when you look at FY15. And it is difficult to predict how the trend will emerge going forward."

The five brands have evolved differently, say experts. Consider this: Fair & Lovely a few quarters ago by HUL's own admission struggled, as rural consumers spurned packaging and product changes and urban consumers migrated to rival brands. HUL then went back to the drawing board and recast the product. It also backed this effort with some heavy-duty advertising and marketing so that rural as well as urban consumers could be lured back to the fold. One such initiative it undertook was the introduction of Rs 5 sachets last year. This was the first time this was done for a product in the fairness cream category as well as for Fair & Lovely as a brand and it ensured that the cash registers kept ringing, experts said. Growth rates, which were down to low single-digits two years ago, are back to double-digits in recent quarters, helping the company achieve the Rs 2,000-crore-plus target, analysts said. Abneesh Roy, associate director, research, institutional equities, Edelweiss, said in a recent report, "Fair & Lovely is the first personal care brand (in HUL's portfolio) to achieve this (Rs 2,000-crore) mark."

Consider the evolution of Lifebuoy. Once a soap brand targeted mainly at males, Lifebuoy today is positioned as a germ-fighter targeting the entire family. This broad basing of consumers has also been backed by product extensions. The company has Lifebuoy hand wash and hand sanitizers and the brand today wages a stiff battle with rival Dettol on the germ protection platform, indulging in ad wars as well as legal battles.

HUL's laundry brands have travelled an interesting path too. First when price warriors such as Nirma entered the market in the 1970s with its detergent powder and then in the 1980s with Nirma cakes or bars targeting HUL brands such as Rin and Surf. HUL responded with price cuts, aggressive sales, marketing and promotions as well as the launch of a mass-market brand called Wheel (Wheel detergent powder was launched in 1985 and Wheel cake or bar in 1987).

In recent years, competition has come from Procter & Gamble (in the 1990s when it first launched Ariel detergent powder and a decade later, Tide detergent) as well as Ghari. Rin and Surf continue to hold their turf in urban areas but Ghari prompted HUL to refurbish its mass-market brand Wheel and introduce a brand ambassador in Salman Khan (in 2010) and increase its ad spends to ensure its base was not eroded, notably in the rural areas. While the 2000-crore club may soon expand to include many new brands and new companies, its membership clearly comes at a hefty premium.