VM&RD brings to you the details of the revised GST tax slabs for the products & services that are used to set up retail stores – starting from store designers to lighting, props, mannequins and fixtures. Some of the industry leaders join in to share their views.

GST (Goods and Services Tax) has been the most revolutionary step to simplify the tax structure in India. Initiated to waive off various taxes to be paid by service providers and bring the concept of one-country-one-tax-system, it managed to create much storm and confusions. It also underwent a few reviews recently to further simplify the system.

➢    After the review in November, lighting, mannequins, props, fixtures and lighting have come down from a whopping 28% to 18%.

➢    The initial months were abrupt, however, post November this year with GST in place, end users of retail are actually benefitting.

➢    Brands and retailers, with pan India presence had to register themselves with different states to reclaim credit. This is a abolished with GST.

➢    Retail service providers are not seeing resistance from their clients. Brands and retailers are actually saving 3%-4% of their investments.

➢    Small scale industries used to have multiple companies to avoid the axe of excise component. Now such companies are finding it easy to do single billing under one name.

➢    Unregistered vendors are removed to a large extent. 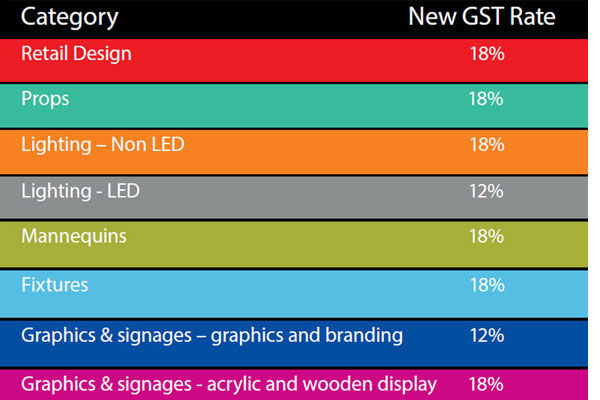 When the value in production looked inflated to customers, they started negotiating the price but once things fell into place and they started taking credit, they actually benefitted. Only discomfort with GST was its timeline and paperwork.

Initially, our B2C business was getting hurt but after the second review, it became fine. Our B2B business has been okay only after initial months of jitters.

Initially, it was difficult to explain to customers but in time things became normal. We have not witnessed any resistance or any encounter of losing business.

We, the small scale industries, have benefitted immensely after GST. Now, we can do single billing under one company and there’s no additional taxes like excise, VAT etc.

Initially, loading of the project for the client was tad difficult. I think that the tax conversations were humongous to make it look difficult whereas, in reality, it was intended to simplify the tax structure.

Honestly speaking, post GST, either with 28% or now with 18% in props, no client is bothered, once they have registered state and city-wise. In fact, tax is no longer an exponent with clients. Yes, while it was 28%, it came almost one third of the price, which was bit too much. Now, this 18% is more logical and acceptable.