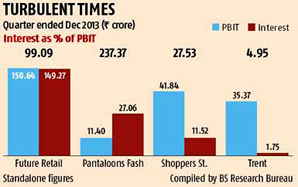 Kishore Biyani's flagship company, Future Retail, has paid 99.09 per cent of its profit before interest and taxes (PBIT) as interest on its loans in the quarter ending December 2013. Simply, whatever it earned during the quarter went for interest payment.

The company said Future Retail paid an interest of Rs 149.3 crore on PBIT of Rs 150.6 in the quarter ending December 31.

In the December quarter of 2013, Future Retail had a total debt of Rs 5,065 crore. A mail sent to the Future Group did not elicit any response.

Abneesh Roy, associate director, institutional equities research, at Edelweiss Securities, said the higher interest ratio was also because the company was yet to receive some of its money from divestments in the insurance business and its expansion of stores. "We're disappointed that debt levels have not come down and interest charges have gone up on a quarterly basis," he said.

Future opened four Big Bazaar stores and six Ezone stores, among others, during the quarter.

Abhishek Ranganathan, vice-president at Phillip Capital, believes the debt levels will go up, given the issues the company faces on cash flows. "For any retail company, free cash flow is not easy, given the low margins and new addition of stores," said Roy of Edelweiss.
However, sources in the company are confident the debt levels and interest ratio will come down. "FRL's debt to Ebitda (earnings before interest, taxes, depreciation and amortisation) ratios will be less than three in less than a year," said a source, who did not want to be identified.

The source said the company's profitability would improve due to cost rationalisation and divestment opportunities in Capital First (Future Capital earlier) and Future Lifestyle Fashions, which was demerged from Future Retail and Future Ventures.

On the positive side, the company's Ebitda margins increased 95 basis points to 9.8 per cent, crossing analyst expectations, due to higher contribution from the fashion segment and cost rationalisation during the December quarter, Edelweiss' Roy said in a recent report.